Running Up A Scam 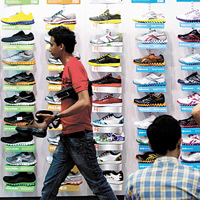 Bharti Airtel has signed an agreement with Qualcomm to buy a 49 per cent stake in the US-based technology major's Indian broadband wireless access (BWA) business. Bharti will make an initial investment of about $165 million (about Rs 922 crore) and will buy a stake in Qualcomm Asia Pacific's companies that hold BWA spectrum in Delhi, Mumbai, Haryana and Kerala. Bharti will fully own Qualcomm's units by the end of 2014.

Aerial Turbulence
The continuing pilots strike at Air India is hurting the national carrier. Air India's losses are mounting, and have touched Rs 270 crore as on 24 May, courtesy ticket cancellations, unused labour and a bulk of its Boeing-777 fleet staying grounded, says a report.

Mixed Message
The Organisation for Economic Cooperation and Development says India's economy is likely to grow more than 7.5 per cent in calendar 2013. That said, it says, policy uncertainty can hit the country's long-term growth prospects. Meanwhile, Standard Chartered Bank has said India's GDP growth slowed to 6 per cent during January-March. That is a fall from previous estimates of 6.5-7 per cent.

Costly Suggestions
Telecom regulator Trai's new recommendations on spectrum auction can make mobile tariffs soar, says auditing firm PwC. The tariff can go up to almost 90 paise per minute in metros. The move could also raise the debt burden of Indian telcos by Rs 272,000 crore over the next five years, says PwC.

Grexit Blues
It's the same drama again. With the threat of Greece leaving the 17-nation euro zone and defaulting on its payments, European Union leaders have urged the country to stay the course on austerity and complete the reforms demanded under its bailout programme. "We want Greece to stay in the euro, but we insist that Greece sticks to commitments that it has agreed to," says German Chancellor Angela Merkel. But as things stand now, radical left parties are expected to win polls due on 17 June, prompting the country's exit from euro.

Hewlett-Packard says it will lay off nearly 27,000 employees or about 8 per cent of its workforce over the next couple of years. The move is aimed to boost growth and save about $3.5 billion annually. It seems the plan has got investors happy; HP shares went up 11 per cent on 24 May. The company says the job cuts will be made mainly through early retirement. The personal computer maker employs more than 300,000 people globally.

Card Game
For social games publisher Zynga, its another game. It has reached a partnership agreement with American Express to issue a prepaid debit card that can be used to redeem virtual credits. The tieup will help increase use of American Express' digital payments platform Serve as the credit card issuer competes with online gateway Paypal.