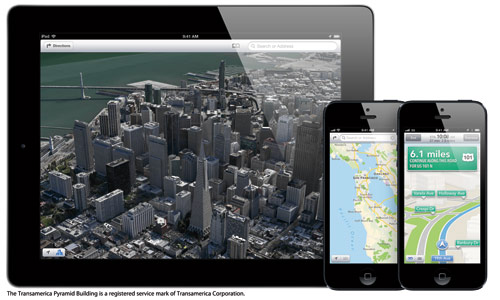 08 November, 2014
Print this article Font size -16+
Facebook integration, an updated phone, camera, browser and mail experience, and the all-new Apple 3D Maps to boot — who wouldn't want to update their iOS device to the latest iOS6 version? However, the euphoria of a new iOS update soon turned into frustration as users in India discovered the new Maps app is nothing like the imagery you see above, and a definite step down from the older Google-powered Maps app. Instead, the app is rife with incorrect data, missing roads, misplaced rivers, even an intricate network of roads spread across a river! Now, the official Google Maps is months away (if not longer)!  Facing certain mapocalypse, what's an iOS user to do if (s)he still wants to get from Point A to Point B? Do you have to suffer the same fate as the poor Aussie drivers who got lost out in the vast Outback courtesy Apple Maps? Not as long as you have these alternatives!

OpenMaps: While Google map data is among the richest I've seen, a solid alternative is an independent mapping technology called OpenStreetMaps. It's not quite as comprehensive as Google maps, but it's still leagues ahead of the Apple solution. There are quite a few OSM-based apps, many of which are paid, but the free OpenMaps app is worth a dekho.

Sygic/MapmyIndia: If you're looking for a pro-quality navigation solution, the folks at MapmyIndia have made your choice easier by slashing the price of their excellent navigation app from $49.99 to $29.99. Granted, it's not free, but you get 3D maps, voice navigation, free city guides and up-to-date maps that work without the need of an Internet connection. The level of detail is by far the best I've seen on a "Made for India" mapping app - you even get house numbers for major cities! Highly recommended.

Waze: While it started off as a social mapping app meant to share traffic updates between users, Waze has evolved to become a very capable navigation app as well, one that provides voice navigation and alternate routes to your destination. And with the crowdsourced traffic data, you can figure out just how bad your commute is going to be! Pretty awesome for a free app! Plus when you're waiting in the traffic jam, you can play around with the customisation options and report things you see on the road, such as traffic jams, petrol prices, sales in a mall and more! The app supports Foursquare check ins as well.

Nokia Here Maps: The most recent of the lot, Nokia's rebranded mapping application works on both iPhone and iPad and packs in a number of features that would be rather familiar to Nokia Maps users, such as nearby points of interest discovery, transit directions etc. What's particularly interesting is a collections feature - cloud-based storage of your favorite locations that's available across devices, and the ability to download offline maps for target areas of the user's choosing for use at a later time.

Navfree GPS: Powered by OpenStreetMap data, Navfree is my pick for a free navigation app, at least if you're living in a big city — the community curated map data has grown by leaps and bounds in the past year. Certain touches — a pedestrian mode or the ability to play music from within the app, (which fades in and out when the voice directions are playing) — make you wonder why there isn't a paid version that you can pick up just to reward the software developer for his/her excellent app. Oh, and did I mention one more benefit? Navfree can work offline - via just a one-time download of map data.

MotionX GPS ($0.99): While the maps in this app leave a lot to be desired, there are a lot of nifty GPS features such as speed calculation, compass, jogging trail mapping and more. Worth a dekho.

Google/Nokia Web Apps: If you still only want the Google Maps/navigation experience, point your browser to maps.google.com in Safari, and then use the "Add to Home Screen" option to pin the web app to your home screen. Yes, it's really just a webpage in Safari, which makes it slow, but it is Google Maps, including all the business, places and transport links you were used to. Or use Nokia maps (maps.nokia.com), which add in offline maps and voice prompts.