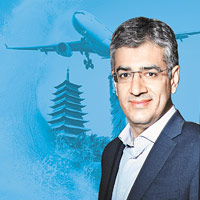 08 November, 2014
Print this article Font size -16+
So, the world did not end, though the Mayan ‘apocalypse’ created a hot new destination in Mexico. In 2012, luxury travel — at least in India — remained fairly immune to recessionary trends and showed good growth. An Accor study says that among Asia-Pac travellers, Indian luxury travellers spent an average of $399 per trip on hotel stays, second only to the Singaporeans ($468).
In 2013, a rise in multi-generation family travel, and detailed concierge services that cater to unusual requests, creating custom-built tours around exotic themes, is quite likely.
Flying High
First and business class travel is going to be very expensive, as capacity comes down. There has been talk of growth in private jet travel. Frankly, I don’t foresee that — at most, it will be a miniscule rise. In 2013, we could see Indian airports starting to think about private terminals. Airport ambience will continue to improve. Transit hubs such as Heathrow and Frankfurt now have smarter interiors and more choices in terms of food and beverages, and I anticipate other airports will emulate this.
Zero Gravity
Pull Experiential vacations will continue to draw the high-end traveller: cycling through the south of France, hiring a Ferrari in Italy and gourmet culinary vacations. Indian luxe travellers could book seats on G-Force One and experience the sensation of floating like an astronaut.
Destinations To Watch
Offbeat destinations such as the CIS countries are getting very positive reviews from the high-end Indian traveller. Destinations such as Prague and Croatia will draw more Indian tourists. North Africa — especially Marrakesh — will remain popular.
Luxe Stays
The high-end traveller does not want to be one of many and is seeking individual experiences, and this is where the boutique chains have an opportunity to offer charming stays. We are also going to see a lot more of Asian luxury hospitality chains checking into India.
Michelin In India
This year, Michelin-star-rated restaurants, so missed in India, will finally start opening their doors here. We are opening one at our hotel, Dusit Devrana. So let the forks fly.
The author is the executive director of the Bird Group