After a number of media houses reported the demise of filmmaker Nishikant Kamat, actor Riteish Deshmukh refuted the claims and issued a statement, which confirmed "that Kamat is on ventilator and still alive".

The 'Ek Villain' star posted on Twitter sharing the health update of Kamat, who is undergoing treatment for chronic liver disease in Hyderabad. Deshmukh tweeted, "Nishikant Kamat is on ventilator support. He is still alive & fighting. Let's pray for him." 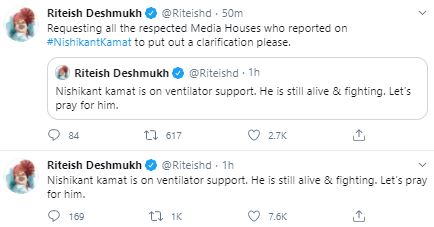 On August 13, the hospital issued a statement saying that Nishikant Kamat is critical but stable, while the filmmaker was undergoing treatment at a hospital in Hyderabad after being diagnosed with chronic liver disease.

The 50-year-old Kamat was brought to AIG Hospitals, Gachibowli, Hyderabad on July 31 with jaundice and abdominal distention.

"He has been diagnosed with chronic liver disease and other secondary infections. He is in the intensive care unit for continuous monitoring under the supervision of a multidisciplinary team of senior consultants comprising gastroenterologists, hepatologists, critical care and others. His condition is critical but stable," said the hospital.

Kamat is known for directing Bollywood films like the Ajay Devgn-Tabu starrer 'Drishyam', Irrfan Khan-starrer 'Madaari'. He has also directed John Abraham-starters 'Force' and 'Rocky Handsome' among others.

He is also known for debut directorial Marathi films like 'Dombivali Fast' and 'Lai Bhaari'.
As an actor, he was featured in the Marathi film 'Saatchya Aat Gharat' and his 2016 directorial 'Rocky Handsome'. (ANI)