Risk Is Back In Equities 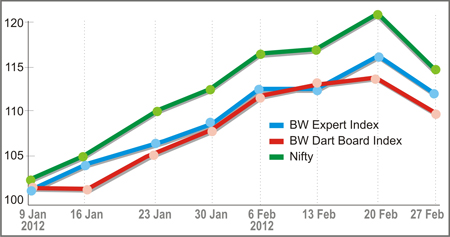 "It's a liquidity driven market with money chasing assets. It's a global phenomenon and nothing unique to India. The current rally has nothing to do with fundamentals," says Agrawal who feels that, "Cheap valuation are helping fund managers to take the extra risk that don't want to miss out on the ongoing momentum by making some moolah." According to EPFR, a US-based agency that provide fund flows and asset allocation data to financial institution reported that year to date till 22 February 2012, mutual funds (US-based) have invested over $20 billion dollars into markets, primarily emerging markets. The biggest buying was in markets such as China, Brazil and India, while selling was in countries like France, Japan and Germany. (See graph: Inflow Outflow).


Meanwhile of the 28 stocks listed on the BW Expert Index, 9 stocks, accounting for 41 per cent of the index weightage, underperforming the Nifty with four stocks — Cipla, EID Parry, Bharti Airtel and Larsen & Toubro recorded negative returns in the range of 0.2 per cent to 9.5 per cent in February. While Bharat Electronics, Oberoi Realty, Jain Irrigation, Bajaj Auto, Cummins India and State Bank of India were the biggest gainers among the BW Expert Index that gained 9 per cent to 15.1 per cent during the month. (See graph: Winners and Losers).

For February, CJ George's picks that has been the part of the seven experts and one institution - Axis Direct that constitutes the BW Expert Index recorded the biggest gain of nearly 9 per cent, though the weightage of his picks to the overall BW Expert Index was 17 per cent. This was followed by Axis Direct that registered a gain of nearly 8 per cent and his weightage to the overall Index has been 31.5 per cent. (See graph:  Stock Pick).

On the other hand in the BW Dart Board Index, 11 of the 31 stocks that underperformed in February included the likes of Hindustan Copper, Reliance Industries, Hindustan Unilever, Dr Reddy's Labs and Apollo Hospitals. Stocks like Lanco Infratech, Indiabulls Financial Services, Unitech and Jet Airways were the top gainers in the pack of BW Dart Board Index.


Though the worst fears are possibly behind us in 2011, the big question among investors are where is the market heading from here on? Says Nilesh Shah, director, Axis Direct, "The flows will keep the mood positive in the market. However before the budget a correction which is inevitable will be healthy for our market, I don't see the Sensex slipping below 17,000."

Adds Agrawal of ASK Investment Managers, "From here on markets would now depend on reforms, interest rate cuts and capital inflows. Though near term positive is the continuing flow of money from FIIs, the near-term uncertainties of Iran (rise in oil price) can't be ignored, which can also spoil the party."

Meanwhile, the Samajwadi Party (SP) winning a clear majority in Uttar Pradesh sprung a negative surprise in the market . Market expectations were that SP would form the government with support from the Congress. Given Congress' weak showing, market is expecting the government to get more cautious that would offer more sops, and would move further away from reforms. In such a scenario, in March, investors are likely to become more discerning over the quality of the stocks they acquire given that the market has rallied too fast in the past two months.