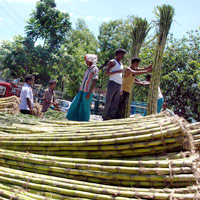 08 November, 2014
Print this article Font size -16+
Finance Minister P Chidambaram has said there was a rising demand for opening bank branches and expressed confidence the bankers would respond positively to it. "Bank branches are important for many reasons. People complain that they cannot open their bank account..if there is no bank branch say within 10 kilometre how do you open a bank account," Chidambaram said while inaugurating 300 new branches in Uttar Pradesh.

"Without bank branch how do you reach to the people to mobilise their savings. I am very happy that now there is a rising demand to open a bank branch in our towns and villages. I am sure that the bankers will respond to it," he added.

On an average, about 6,000 branches were being opened every year in the last 2-3 years, Chidambaram said.

"I am sure that in 2013-14 all our banks will open a large number of branches. In UP alone there is a plan to open another 2700 branches. If you can do it in UP, you would be able to do at least 10,000 to 12,000 branches all over the country. I want all the bankers to put their best efforts to achieve the target," he said.

Chidambaram said that there would always be some national average and some states would be below it and some above it. "...It is the rise of the average that will make India a strong country," he said.

"We want all of India to grow and specially we want poor states and underprivilege to grow because while they grow, whole of India grows," he said. He expressed confidence that by March 2014, every branch would have an ATM.