Ringing In A Fortune 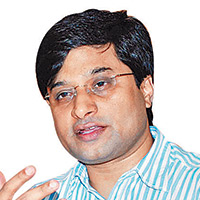 08 November, 2014
Print this article Font size -16+
A successful initial public offering has made Justdial founder V.S.S. Mani a rich man. A quick calculation suggests the Jamshedpur-born Internet entrepreneur is now valued at  over Rs 1,300 crore. His 1996-founded Justdial’s Rs 950 crore IPO was over-subscribed 12 times, and the share, on listing, closed about 15 per cent higher than the offer price of Rs 530. The IPO was among the biggest by an Indian Web firm. Looks like the 14-year wait to list was worth it.
On A Power Trip
Nawaz Sharif  is back in power in Pakistan. Last week, the country’s National Assembly formally chose the 63-year-old leader of the Pakistan Muslim League-Nawaz as prime minister. In his third term, though, Sharif faces some serious economic challenges, and a worsening energy crisis. The country  faces power outages that, at times, stretch up to 20 hours in regions such as Punjab.

Sharif says growing the economy is his top priority and he has vowed to even tune his foreign policy towards that end.
Change Agent
In a candid remark at the World Economic Forum, Myanmar’s popular leader Aung San Suu Kyi  said she would like to be president of the south-east Asian country. Suu Kyi, who was released by the junta last year from a two-decade-long house arrest, says her priority will be to boost the economy by eradicating poverty.

According to an IMF forecast, Myanmar’s GDP could grow by 6.75 per cent this fiscal, powered by natural gas sales and investment.
Bad Start
A $2.5-million fine has played spoilsport at the dream wedding of  Napster co-founder and former Facebook ­president  Sean Parker. The 33-year-old got married to singer -lyricist Alexandra Lenas in a $10-million ceremony in Big Sur, a protected coastal area, where authorities found he had built an entire makeshift village, violating rules.
A Tough Cookie
He has big shoes to fill. But industry observers hope Varun Berry’s nearly three-decade-long experience will stand him in good stead in his new journey as the India head of Britannia Industries. Berry has replaced managing director Vinita Bali, who will now  oversee global operations and new business development at the Rs 6,200-crore food products giant.
In The Clear
Citing lack of evidence, the CBI has closed a 12-year disproportionate assets case against Vincent George, former personal secretary to Sonia Gandhi. George was a key aide to ­Rajiv Gandhi  as well.
Obama’s Pick
US President Bar­a­ck Obama picked confidante Susan Rice to be his national security adviser, replacing Tom Donilon. Rice is expected to play a pivotal role in defending Obama’s foreign policy, mainly on Syria. Rice was earlier considered a replacement for Hillary Clinton as secretary of state, but was passed over in the face of Republican ire over the way she handled the Libyan crisis as UN ambassador. Samantha Power will replace Rice at the UN.
Two Departures
India lost two talented men recently. Rituparno Ghosh, who died of a heart attack, was a Bengali filmmaker whose works on gender, sexuality and urban life fetched him global acclaim. Ghosh was 49. Raincoat, starring Aishwarya Rai, was his most successful Bollywood venture, raking in more than Rs 4 crore at the box office. Tech guru Atul chitnis,51, died of cancer. He was an open source software evangelist and columist.