Washington [US], February 2 (ANI): International pop star Rihanna extended her support to farmers protesting on the borders of India's capital against the three agriculture laws introduced by the Central government last year and asked why people were not talking about it.

Taking to Twitter, the 32-year-old pop star shared a news story by CNN on the internet shutdown in several districts of Delhi's neighbouring state Haryana after protestors broke barricades to enter New Delhi and clashed with police in several parts of the national capital during the January 26 'tractor rally' protest organised by farmers. The protestors also entered the iconic Mughal Era monument Red Fort and unfurled their flags from its ramparts.
"Why aren't we talking about this?!", wrote Rihanna, as she added the hashtag #FarmersProtest along with the post on the micro-blogging site. 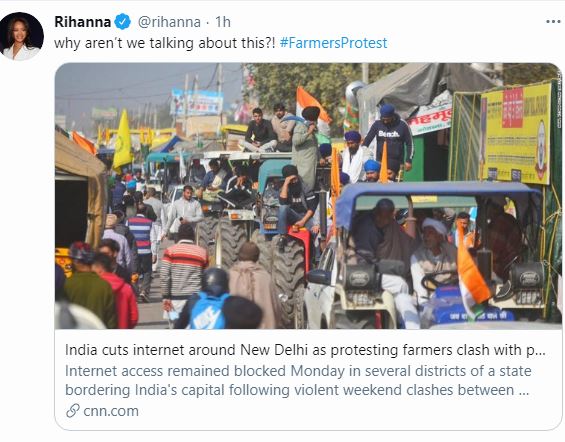 The 'Umbrella' crooner's tweet evoked reactions from fans and celebrity followers and caused her to trend on the microblogging platform. With over 241,000 tweets, Rihanna was trending at Number 1 spot in India on the site. Till 11:10 pm (IST), her tweet garnered 144,000 likes and over 70,000 retweets. 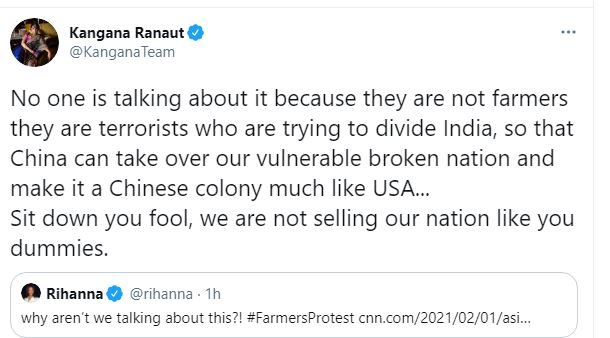 Actor Kangana Ranaut, who had supported farm laws called Rihanna a "fool" and said that the protestors were not farmers but "terrorists who are trying to divide India".
"No one is talking about it because they are not farmers they are terrorists who are trying to divide India, so that China can take over our vulnerable broken nation and make it a Chinese colony much like USA... Sit down you fool, we are not selling our nation like you dummies," the 'Panga' actor tweeted.
Others like Priyanka Chopra Jonas and Diljit Dosanjh have earlier come out in support of the farmers on Twitter. Diljit also had a Twitter spat with the 'Queen' actor following their contrasting views on the protesting farmers.
"Yes! Thank you so much Rihanna. This is a humanity issue! #IStandWithFarmers and this narrative is TIRED," Canadian YouTuber, comedian, talk show host, and actress Lily Singh tweeted.
Meanwhile, the Haryana government has extended the suspension of mobile internet services in several districts of the state till 5 pm on February 3.
Farmers have been protesting on the different borders of the national capital since November 26 last year against the three newly enacted farm laws: Farmers' Produce Trade and Commerce (Promotion and Facilitation) Act, 2020; the Farmers Empowerment and Protection) Agreement on Price Assurance and farm Services Act 2020 and the Essential Commodities (Amendment) Act, 2020. (ANI)