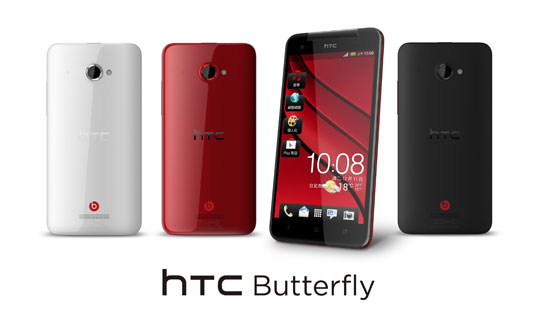 08 November, 2014
Print this article Font size -16+
No sooner had our pockets, hands and wallets evolved to handle the five-inch smartphones of 2012 that we have now to contend with what is sure to be the norm for 2013 – full high definition screens on smartphones. Yes, that’s the same resolution display as the LCD TVs in most living rooms today…in a phone! HTC’s the first out of the gates with its full-HD toting Butterfly – let’s flit over whether it’s worth the rather princely asking price, shall we?

Let’s get one thing out of the way first, though. Butterfly? Seriously? A name like this does serious disservice to the phone, more so when you’re asked by curious onlookers which phone you’re carrying! Get past the name, and the phone makes a pretty great first impression. The soft-touch polycarbonate back panel, the grill pattern along the side and a screen whose edges look like they’re melting off the sides of the phone all make the Butterfly look like a million bucks, and the slim profile and light weight (for the size) make it nice to hold in the hand. Yet, the design is not without issues. The power/lock button is dead center on the top, which makes it awkward to press – a button the side would have been much more natural. Plus the micro-SIM and microSD card slot is covered by a plastic flap that's ridiculously hard to pry open.

Under the hood, the phone checks off all the boxes – a powerful quad-core 1.5GHz Qualcomm Snapdragon S4 Pro processor with an Adreno 320 graphics processor, 2GB of RAM and 16GB of onboard memory with a microSD card slot for expansion. In everyday use, apps and games load plenty fast and the interface is responsive, even though the phone is pushing out many more screen pixels than other flagship Android devices. The camera pushes out great images (not the best I’ve seen though), and I liked the extra wide angle front facing camera, which is perfect for group shots.

But it’s the screen that rightfully gets all the attention — this is one seriously impressive display. It packs in an incredible pixel density of 440pixels per inch, far above the iPhone 5 and the Note II. Specs aside, colour reproduction is excellent, viewing angles are superb and brightness is almost unrivaled in the market right now. You really have to see this in the flesh to fully appreciate it.

But is the bump up from the 720p resolution displays of the One X+ or the Galaxy S III worth all the extra pennies you have to shell out for the Butterfly. In everyday use, probably not. What also works against the Butterfly is that by the time you read this, a new HTC flagship is expected to be right around the corner, ready for its India launch. Great phone, bad pricing and timing?