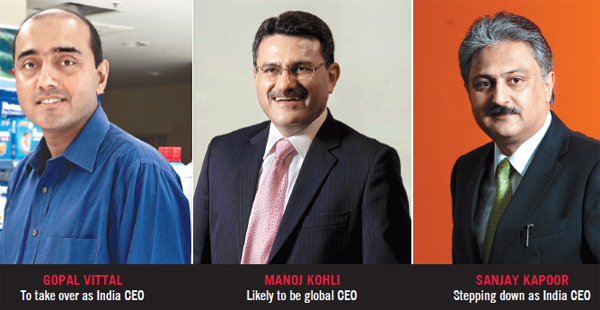 08 November, 2014
Print this article Font size -16+
IT has been in the air for a while now. Sanjay Kapoor, CEO of Bharti Airtel, signs off February-end. Gopal Vittal, who rejoined the group in April 2012 as group director-special projects, will replace him as CEO of Indian operations. The South Asian operations (Bangladesh and Sri Lanka), which were under Kapoor till now, will move to Manoj Kohli, who heads the African operations.
So what does this mean? People in the know say that Bharti wants to integrate its Indian and African operations. Under the proposed structure, Kohli is likely to be named global CEO. Both the Africa and India CEOs will report to him. That would have meant Kapoor would have reported to Kohli.
The careers of Kapoor and Kohli have intersected many times in the corridors of Bharti. In March 2009, Kapoor was named deputy CEO when Kohli was CEO and joint MD. In February 2010, Kapoor took over as CEO, replacing Kohli, who went on to head international markets. Later that year, when Bharti acquired Zain Group’s African telecom operations, Kohli moved to Africa. With Kapoor leaving, that era seems to have ended. In case Kohli is made global CEO, the group will need to appoint a new CEO for Africa.
A telecom consultant says Kapoor has been under pressure with profits declining over the last several quarters. Also, 3G services did not provide the expected traction. Profits fell from Rs 2,044 crore (quarter ending March 2010) to Rs 701.5 crore (quarter ending September 2012). However, it was in June 2010 that the group invested $9.7 billion to acquire Zain’s African operations (17 countries now). In one shot, the net debt of Bharti Airtel rose to Rs 60,230 crore (June 2010) from just Rs 2,392 crore  in the previous quarter ending March 2010. As of September, the net debt is Rs 66,670 crore.
With Vittal coming in, Bharti wants to drive data revenues over the next few years as voice revenues are expected to be largely stagnant. As part of this strategy, a Bharti group spokesperson points out that in the last nine months, Vittal has spent time with Singtel Group in South Asia/Australia and SoftBank Corporation, understanding emerging trends in the data and Internet space.
Commenting on the appointment, Bharti founder Sunil Bharti Mittal said, “Gopal spent his last year understanding the new wave of mobile telephony, in particular the data space and data experience. This will be extremely relevant and valuable for the next phase of Airtel’s growth.” Vittal is expected to define and deliver the business strategy and provide overall leadership for Bharti’s Indian operations — including enhancing market share and margins, along with growth of alternative revenue streams like 3G, Airtel Money and value-added services.