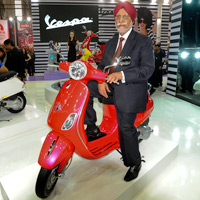 The iconic Vespa  looks all set to hit the Indian roads in April this year. This would be the Italian company Piaggio's third entry to India on its own – after its partnership ended with Bajaj and LML. Having re-established its portfolio in leisure motorcycling through a series of new products in last couple of years, legendary motorcycle company Royal Enfield unveiled its cruiser segment offering Thunderbird 500, almost 10 years after the launch of Thunderbird 350 on Thursday. The iconic Harley-Davidson that brought cruiser and touring motorcycle concept to India, on the other hand, will bring two more products to the Indian market by end of this year. Honda Motorcycle & Scooter India (HMSI) on Thursday unveiled seven models, including two international models at the first day of Auto Expo 2012.

The Vespa Comeback
Vespa  on Friday launched its Vespa LX 125cc scooter at the Auto Expo. However, the company says it is called just Vespa in India. "We will position the product in the premium luxury segment," says Ravi Chopra chairman & managing director, Piaggio Vehicles. The company may bring additional models to India in a due course of time.

Though the price of the product is not yet revealed, the company aims to sell around 30,000 units per annum. The scooter will be manufactured at Piaggio's Baramati plant in Pune, which has an initial capacity of 150,000 units and could be further increased. "We will look at ramping our capacity from 150,000 units to 200,000 units according to the demand," says Chopra.

The product will be available through 50 dealership across 35 cities. The company will also look at forming exclusive Vespa owner's club at the later half of the year. Piaggio also showcased its popular MP3 hybrid motor at the Expo.

For Royal Enfield, the cruiser motorcycle that sports an all-black unit construction engine —  the one that we see on the Classic 500 with fine-tuning for the cruiser — has got a new look with appealing low-beam and high-beam twin projector headlamps, a bulkier 20 litre fuel tank, rear disk brake and fatter 41mm forks. "We will launch the Thunderbird 500 by the end of the first half of 2012," Chief Executive Venki Padmanabhan said.

"We listened to the needs of highway cruisers in India and covered improvements on a variety of fronts – range, ergonomics, looks, braking, night riding visibility, luggage carriage capability, even clothing and accessories," he added.

With annual sales of 75,000 units, Thunderbird 350 contributes about 12,000 units to the total sales. The company will continue to sell the existing 350cc model, with the new Thunderbird 500 positioned as an extension of the brand.

With leisure and cruiser motorcycling culture gaining momentum in India, international players like Harley Davidson are making their presence felt. In India, Royal Enfield wishes to spread its culture and such boosters will certainly help.

The iconic brand Harley-Davidson that brought cruiser and touring motorcycle concept to India will bring two more products to the India market by end of this year.

"We will bring two more products to India by end of 2012 and we will also look at setting-up three more dealerships by 2013," says Anoop Prakash, managing director, Harley- Davidson India. The company at present sells 15 models in the country through its existing seven dealerships. It will add three more showrooms by end of this year in Kochi, Kolkata and Jaipur.

Harley Davidson on Thursday launched the expansion of its Complete knock down (CKD) facility which is at Bawal Haryana. The facility will now locally-assemble models --  FXDB Street Bob and FXDC Super Glide Custom, earlier CBU models -- at a price starting from Rs 9.95 lakh and Rs 11.5 lakh, which is much lower than their earlier starting price of Rs. 13,995 and Rs 15.45 lakh respectively.

With this move, the company will assemble five motor bikes in total out of the 15 products available in India.

Revving To Take On Competition
Honda Motorcycle & Scooter India is optimistic about overtaking its competition once its third plant in Karnataka is operational.

"Once the capacity goes up with the new plant in Karnataka, we will be in a better position to compete," says Keita Muramatsu, president & CEO, HMSI, India.

The company is looking at ramping up its current annual production capacity of 2.2 million to 4 million vehicles by mid-2013.

The CBR 250R on the other hand is expected to be available for sale in dealerships from February this year.

This year the company's strategy would be to expand its two-wheeler business in India by rapidly expanding production and launching cutting edge products at a competitive price points.