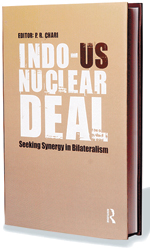 Just when one would have thought that enough has been said and written on the Indo-US nuclear deal, out pops another book that seeks to delve into the intricacies of that subject. Oddly, however, the book is pertinent. For, though the deal is of immense significance, there remain many aspects of it that are not fully appreciated or understood. Former bureaucrat-turned-strategic analyst P.R. Chari seeks to provide an overview of the historic deal and a modicum of insight into its intricacies. The result is a very useful book indeed. More so because half of the book is made up of an extremely useful appendix containing key documents and text of legislation.

Chari ploughs into the subject with an introduction that gives an overview of the subject and goes on to argue that the deal was good for India. He believes that the deal will help India's struggling civilian nuclear sector without hampering its strategic weapons programme. Also, it will not circumscribe India's foreign policy options.

Journalist Vidya Shankar Aiyar's short but significant essay, ‘Prime Time Deal', explains how the media did not appreciate the key point that the deal was driven by Washington and not New Delhi. He points out that the deal was part of a larger strategic relationship the US wanted with India. The Indian leadership was drawn into the deal and later tried to pass it off as something it had come up with on its own.

Perhaps the most significant parts of the book is the space it devotes to challenging the view that the deal hurts India's strategic weapons programme. Chari argues that it does not "circumscribe India's strategic programme, since its military facilities and installations will remain outside the purview of the International Atomic Energy Agency (IAEA) safeguards. The question of how many nuclear weapons are required to establish a credible nuclear arsenal governs how much fissile material is required for its manufacture, which in turn derives from the estimated size and shape of India's credible minimum deterrent. Any rational estimate of the requirements of India's credible nuclear deterrent would suggest that its separated military facilities are quite adequate".

This subject is also explored in a paper titled ‘Implications of the Indo-US deal for India's Energy and Military Programs' by R. Rajaraman. He points out that India's ability to produce weapons-grade plutonium will not be jeopardised by the deal because the new Prototype Fast Breeder Reactor (PFBR) is expected to come on stream and together with the Dhruva reactor would be able to produce enough quantities of weapons grade plutonium. This despite the agreed shut down of the CIRUS reactor in Trombay.

Rajaraman estimates that India has a large and more than sufficient stock of reactor-grade plutonium it can use to generate weapons-grade material. "Once the Fast Breeder Reactor begins to contribute after it is commissioned in 2010, it will itself yield another 28 weapons worth (plutonium) every year. In addition to this, there is also the huge stock of reactor-grade plutonium (about 12 tonnes) in the spent fuel of our CANDU reactors. Therefore, even a target of building an arsenal of 200-300 warheads is within our reach by 2020, despite whatever restrictions are placed by the deal."

Lalit Mansingh argues that the deal is not only about India's energy needs, but also about its security and international status. He writes that the deal explicitly endorses and legitimises India's strategic weapons programme. The other plus, according to Mansingh, is that the deal has enhanced India's international status. He, however, cautions that "India will now need to take a hard look at some of the aspects of the Indo-US nuclear deal and gear itself for an eventual ban on further testing as well as a freeze on the production of fissile material. The Indian public had unfortunately been led to believe during the negotiations that neither of these issues were on the horizon".

The book is clearly pro-deal, which is not surprising given Chari's leanings. However, he should be given credit for putting together a compilation, which does not shy away from addressing some of the critical implications of the deal — particularly its impact on India's strategic weapons programme and how the subtext inserted into the deal by subsequent developments could still jeopardise it.

Many of these issues have not been addressed or dealt with adequately by the popular media. Chari takes on these and other contentious issues head on and emerges with a book that is a meaningful addition to the small but growing corpus of work on India's nuclear affairs.

Indranil Banerjie is Executive Director with SAPRA India Foundation, a think tank that focuses on peace and conflict studies.