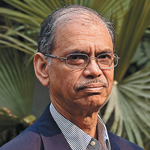 08 November, 2014
Print this article Font size -16+
As Europe braces for another debt crisis and an angry American electorate threatens to "throw the bums out" in November, Asia's economy is humming along at a healthy clip. Is the much-talked about decoupling finally a reality? Two recent reports hint that this may well be the case. Indeed, despite declining import demands from the developed world, emerging countries such as China, India and Brazil seem to be blazing their own paths to growth. But it may yet be too early to pop the champagne.

In its recent update to the Outlook 2010 forecast, the Asian Development Bank (ADB) raises its earlier estimate of the region's GDP (gross domestic product) growth. ADB says that China and India were the main engines of regional growth and are expected to grow at 9.6 per cent and 8.5 per cent, respectively. This stands in sharp contrast to the near-flat growth and large unemployment that characterises Europe, Japan and the US. Asia's economies appear to have decoupled from the developed countries.

Growth statistics from different parts of the world seem to support this optimistic reading about developing countries, the collective size of whose economies are set to surpass those of developed countries by 2015. The World Bank says some of the developing countries may earn the moniker "newly developed". As they solidify their growth, they could be doing "reverse coupling" or become the engine pulling the slumping western economies.

How will the economies built on export-driven strategies achieve that at the same time as slack demand from debt-ridden western economies becomes the ‘new normal'? Canuto says that developing countries can count on some autonomous sources of growth. The list of such sources that Canuto believes could help achieve a role reversal looks, however, better on paper than in reality. He says, first, with their strong reserves, the emerging countries can leverage investment in the public sector. Secondly, the growth of the middle classes will raise the level of domestic demand, thereby reducing export dependence. Third, with the falling cost of knowledge transfers, these developing countries will fast bridge the technology gap. Fourth, greater trade integration will lead to better and more productive reallocation of resources. Finally, as commodity prices remain high, the revenues from them will be better managed.

If the Indian experience with infrastructure building is any indication, the availability of funding may prove to be less of a bottleneck than corruption, bureaucracy, lumbering judiciary and inept governance. The growing middle class will surely create demand, but, as China's experience shows, the consumption urge will be tempered by the lack of social safety net and healthcare. A technological leap and innovation, which Canuto says will propel developing economies, will depend on the education and intellectual property protection, which are woefully lacking. High commodity prices may help some countries, but how that resource is put to use will depend on smart, non-corrupt governments, of which there are few among developing nations.

The main trouble with this optimistic scenario of developing world rising to pull the developed world out of recession is the reality of policies on display. China may have strong domestic reasons not to revalue the renminbi, but their determined attempt to keep it low does not signal a move towards consumption. Similarly, Japan's recent market intervention to prevent the strengthening of the yen and Brazil's attempt to keep its exports competitive by lowering its currency point to continued dependence on exports to the developed world as a growth engine. As the US and Eurozone are stuck with slow growth and developing countries are tempted to rely on export by currency manipulation, the brave new world of reverse coupling seems far away.