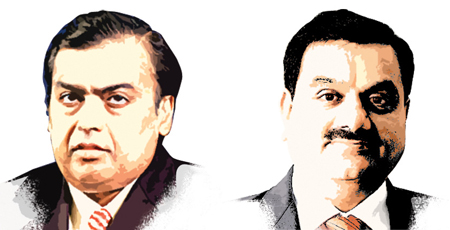 As with the gainers, it has been the fortunes of their businesses that have caused the loss. Most have been natural resource-based (oil, minerals and metals) or in sectors that have been at the receiving end of the economic backlash, like realty and infrastructure. In one instance, it can be blamed upon the misfortunes of the IT services industry.

These businesses are also cyclical, and bear the brunt during any economic downturn. That apart, several of them have been bested by specific problems. Infrastructure firms — telecom and power — have been challenged by changes in the business environment. In the case of the former, the next stage of growth has been slow in coming; in the latter, policy uncertainty over fuel linkages and supply have hurt badly.

The natural resources business is always a political hot potato; roadblocks are recurrent, erected either by the government or by activist groups. And to be fair, some of them have highly leveraged balance sheets that have slowed growth, and thus additions to wealth.

In contrast to the businesses of the wealth gainers, however, those who lost wealth have shown no capacity for breaking into new markets, or expanding existing ones. Business cycles determine their fortunes, and they have no way of getting away from that.

But are they hurting? Hardly. Their wealth runs into thousands of crores, and is far from being affected by what may ultimately be a reduction in paper wealth. The lights of Antilia, the Mukesh Ambani family residence on Altamount Road in Mumbai, still light up the city's skyline.