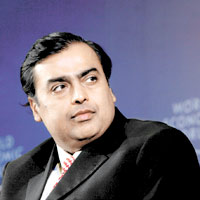 Head On
Automaker Nissan is gearing up to take on the competition from the top three Indian carmakers. It is working on a range of low-cost small car projects. The cars are to be introduced in India under the Datsun brand in 2014. Datsun cars will fight for space in the price bracket of Rs 2-4 lakh. The country's highest selling model, Maruti Suzuki Alto, Hyundai's Eon, and Tata Motors' Indica fall in the same price bracket.

Closure In Sight
Finally, the Unitech Group has agreed, in principle, to shed its stake in Uninor to its joint venture partner Telenor. Reportedly, Unitech lawyers on Monday made the proposal before the Company Law Board (CLB). Last week, the CLB had asked Unitech to make up its mind by March 19 on whether it wanted to buy Telenor's 67 per cent stake in Uninor or sell its own 33 per cent stake to its Norwegian partner. To protect their investments and rights Unitech and Telenor had moved the CLB against each other.

Taxing Issue
Vodafone has warned that the government's retrospective amendment of income tax laws does not send good signals to the investors. Vodafone India's non-executive chairman Analjit Singh said, "As a practising businessman in India, this will not augur well for FDI and the country at large."

Funnelling Funds
To begin the second phase of the Aakash tablet project, the government has allotted Rs 765 crore for it. Earmarked in the Union budget, the money has been allocated under the Ministry of Human Resource and Development's National Mission for Education through ICT. The mission had launched the low-cost tablet project last year.