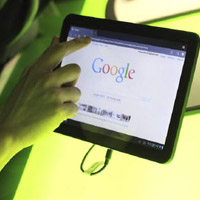 Sales are likely to have reached 3 million in 2012, up from about 0.5 million in 2011, the firm estimated on Friday, citing data for the quarter to end-September, when companies led by Samsung Electronics Co Ltd sold 1.1 million tablets.

With the launch of low-cost devices running on Google Inc's Android platform by local firms, sales of tablets and smartphones have grown rapidly in the last two years. A slew of global makers of tablets have also entered the market.

In 2013, new tablets based on Microsoft Corp's Windows 8 platform and companies' adoption of tablets for business applications will change the market significantly again, Faisal Kawoosa, lead analyst at CyberMedia's telecoms practice, said in a statement.

India is the world's second biggest telecommunications market with about 900 million mobile phone accounts. But computer penetration is low, and only about a tenth of its 1.2 billion people have access to Internet.

Samsung had a 23.9 per cent share of tablet computers sold in India in the July-September quarter last year, CyberMedia Research said.

Local firm Micromax ranked second with 15.3 per cent of the market, while Datawind, the maker of Aakash tablet, billed as the world's cheapest tablet computer, ranked third, it said in the report.

Apple Inc, the maker of iPad tablet computers, was ranked fifth with an 8.7 per cent share, the data showed.

The average sales value of tablets during the quarter was about 13,200 rupees, while 63.5 per cent of the sales were below 10,000 rupees, CyberMedia Research said.