Remembrance Of Things Past 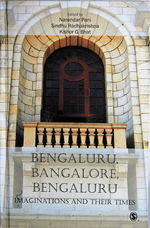 How do you tell the story of a city whose name has become an awkward figure of speech of globalisation? The editors of Bengaluru, Bangalore, Bengaluru know how to. Subtitled ‘Imaginations And Their Times', the book pieces together the history and imagination of Bangalore across three centuries. Several other attempts have been made on Bangalore including Beantown, Boomtown by Jayanth Kodkani and R. Edwin Sudhir, The City Beautiful by T.P. Issar and Bangalore: A Century Of Tales from City And Cantonment by Peter Colaco. But none of them has gone as far back in time or adopted such an unusual mode of narration as this book has done.

The book tells Bangalore's story through voices of different people, somewhat close to the one of Bob Dylan in the movie I'm Not There. There is Colonel Mark Wilks writing a first hand account of the battle for Bangalore in 1791, Mirza Ismail's exhortation on ‘examinations and merit' to a gathering at the Bishop Cotton school in the early 1900s, and quite predictably, an extract from Infosys's initial public offering that records the birth of modern India's posterchild. The book also tracks, among others, thespian Rajkumar and the Kannada language movement. It also discusses the city's infrastructure woes from an urban planning and architectural perspective. No account of Bangalore would be complete without a note on its climate and communal peace — both of which are alluded to in a piece by none other than Mahatma Gandhi.

The book is an admirable labour of love and a must read for all those whose cities have been renamed with no attempt to guard or preserve their heritage.