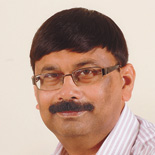 Larsen & Toubro (L&T) is considered to be an extremely well-run company both by its peers in the industry as well as the financial community. The firm that was set up by Henning Holck Larsen and his schoolmate Soren Kristian Toubro in 1938 is regarded as one of India's best infrastructure and process-engineering firms. Its reputation once made it an acquisition target for Reliance Industries, though India's biggest company finally sold out its stake in L&T after holding it for many years.

Many of India's better constructed roads have the L&T imprint, as do some of the more complex power plants and other industrial projects. The company is not known to be a flamboyant risk taker, but it takes quite a few calculated risks. And, in the past, many of these risks have paid off richly. L&T's long-serving chairman and managing director, A.M. Naik, has often backed his hunches and made the company big money.

A few years ago, Naik also got L&T into the software business. Though its software business is very small, the company has always dreamt of joining the big league in that sector as well. It was an aggressive bidder for Satyam, though it was finally pipped to the post by Tech Mahindra. Of course, L&T is likely to make a neat profit even from its bid on Satyam: the shares it picked up while bidding for the scam-tainted firm are today worth more than it paid for them. And there are expectations that the Satyam shares will rise even further, giving L&T the opportunity to exit at a profit.

While all these are well-known facts, what has gone unnoticed by many L&T watchers is that Naik is rapidly remaking L&T. In four to five years, he hopes that L&T will have little resemblance to the company he runs currently. Exactly what is he doing? To know that, turn to page 30 for Deputy Editor Srikanth Srinivas's account of Naik's grand plans.

(This story was published in Businessworld Issue Dated 10-08-2009)
Tags assigned to this article:
prosenjit datta magazine editors letter larsen and toubro am naik