Relying On Information And Conviction 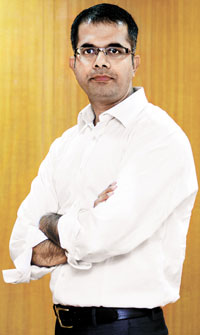 08 November, 2014
Print this article Font size -16+
There are three avenues to making money by investing in stocks: market timing, sector allocation and stock selection. The probability of success by taking each avenue varies: market timing pays off half the time or less, but stock selection succeeds seven times out of 10.

This is the strategy behind the success of SBI MF’s Emerging Businesses Fund. For one thing, it limits portfolio size to just 25 stocks, compared to the average 40-50 stocks that its peers might have. Second, its investments are return-based; the value of investments double — or are expected to — in three years. Third, it is benchmark-agnostic: it is the absolute return or alpha that matters, and not relative return (beta).

“We are market cap-agnostic, sector-agnostic and benchmark-agnostic,” says 42-year-old R. Srinivasan, head of equities at SBI Mutual Fund, who manages this fund. “We are an analyst-driven investment fund; there are no risk constraints. Our investments are high-conviction stocks and we have concentrated investments.” This implies that it is a risky fund, but so far, it has paid off handsomely.

The top five stocks make up for nearly 30 per cent of its portfolio. What started off as a small cap fund has become a mid cap fund. Its average assets under management (AAUM) amount to almost Rs 990 crore (it started out with just Rs 150 crore). It has returned over 50 per cent in one year, even as its benchmark index, BSE-500, has returned 31 per cent (even though the fund does not use the benchmark).
This is because stock selection has hit the mark most times. Srinivasan calls it research arbitrage, the ability to exploit information symmetries by going beyond those stocks that the market looks at and converting that into moneymaking buys. For example, the fund bought United Spirits at about Rs 550, when no one in the market was even looking at the stock. “Our analyst suggested that there was hidden value in the business that was as yet undiscovered,” says Srinivasan. “We sold out at around Rs 900, within a few months.” The fund also got back into the stock at Rs 1,200, but that was purely a speculative buy, he says. In the end, both bets paid off.

Gold finance companies are another example. Muthoot Finance, one of the top five stocks in the fund’s portfolio, was another buy which was a great call, as was Hawkins Cookers. “About 4.5 per cent of the portfolio is in Hawkins,” says Srinivasan. “But the company’s management does not meet analysts, and directs everybody to its annual report, which is as transparent as can be.”

The numbers suggest that irrespective of whether the market was up or down, SBI MF Emerging Businesses Fund gave an excess return of 20-25 per cent. Srinivasan, however, admits that not all the bets made money. On an average, the fund has returned over 20 per cent on a compound annual growth rate for the past three years.

But the law of big numbers poses a risk to the agnostic investment philosophy of the fund. Once the fund reaches Rs 1,000 crore in assets, the excess returns the fund has been showing for the past three years may decline. Srinivasan is aware of this. “This could have been a Rs 3,000-crore fund had we wanted, but (then) returns cannot be as spectacular as they have been,” he says. A large influx of money into the fund also dilutes the fund’s mandate and its identity of being market-,  benchmark-, sector- and liquidity-agnostic. While he still keeps the number of stocks at 25, there is now a ‘liquidity pocket’ in the form of large cap stocks like Tech Mahindra and Cairn India.

Srinivasan attributes the fund’s success to rigorous research that gives him the arbitrage effect and his team of analysts that thinks out of the box and generates high-conviction ideas. The last six months of 2012 have been particularly good for the fund. This year, too, the fund may generate excess returns like it has for the past three. How much? Check in same time, next year.