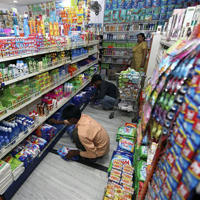 08 November, 2014
Print this article Font size -16+
In the last four years, hardly any Indian retailer increased their number of stores. Future group’s Big Bazaar and AV Birla group’s More have shut down more than 30 per cent of the value format stores and focused on high-margin super market and hyper market business. But Mukesh Ambani’s Reliance Retail has chosen to go against the conventional wisdom by attempting to create a large base.

Yet, despite its Rs 10,000-crore revenue, Reliance Retail is struggling to succeed. It has increased the number of stores to 1,500 from around 1,150 in 2010. Last year, when Businessworld wrote on the value formats under Reliance Fresh, it had 1,300 stores and the total retail business reported Rs 7,500 crore of revenue (Read: Digging Day To Stay Fresh).

The numbers are really landmarks. But Rs 10,000 crore from 1,500 stores means each store generates average annual revenue of Rs 6.66 crore. The analyst community says that the number is below expectation. Also, the EBDIT of Rs 78 crore that Reliance Retail posted could have been better considering the nearly 7 years of experience and the farm-to-fork format created by the company. Historically, the margins are higher for retail players who source everything directly from the producer.

Ambani plans more investments in the retail business to catapult the revenue to Rs 40,000- 50,000 crore. Since this is topline focused growth, mass-base creation is important for him. But the value formats CEO Robert Cissell prefers to build more hypermarkets of 50,000 sq. ft or more rather than the small Fresh stores, where the margins are less. Creation of a solid retail business model is critical for Reliance.
Tags assigned to this article:
exclusive to web nevin john future group business model walmart hyper market big bazaar othertop1 indian retailers retail business birla group conventional wisdom market business