Reliance, Religare Gear Up For Setting Up Banks 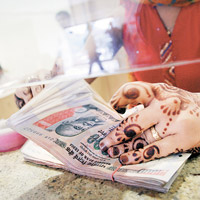 08 November, 2014
Print this article Font size -16+
Corporate entities interested in setting up new banks, including Reliance and Religare, have begun doing the groundwork after a key Bill was passed in the Lok Sabha on 18 December evening.

In a major step to reform India's banking sector, the Lok Sabha had passed the Banking Laws (Amendment) Bill, 2011, paving the way for foreign investments in the sector and establishment of new private banks.

Finance Minister P Chidambaram had been urging the RBI to start issuing new banking licences for some time. This is the second time in two weeks that the finance minister has raised the topic of new banks with the apex bank. Inaugurating the two-day annual national banking summit (Bancon 2012) in Pune on 24 November, the finance minister also asserted that India must have two or three world size bank, saying some consolidation in the banking system is inevitable.

The Bill will allow RBI to supersede boards of private sector banks and increase the cap on voting rights of private investors in PSBs to 10 per cent from 1 per cent.

RBI wanted the government to amend the banking laws before starting the process towards issuance of new banking licences.

Welcoming the passage of the bill in Lok Sabha, Religare Enterprises chief Shachindra Nath said that "it is important that new banks are brought in to contribute towards the overall financial inclusion and development agenda".

"We are now waiting for the Bill to be passed in the Upper House and the RBI to come out with its final guidelines post which we would evaluate how we align our banking business model with the regulatory intent," Nath said.

"Given the under penetration of banking and financial services in a country as large as India, it is important that new banks are brought in to contribute towards the overall financial inclusion and development agenda," he said.

"Having said that, this will also pave way for more reforms and investments in the sector," Nath added.

When contacted, a spokesperson for Reliance Capital, the financial services arm of Reliance group, also welcomed the passage of the bill in Lok Sabha, but did not comment further.

Reliance Capital CEO Sam Ghosh has earlier said that the group is full-prepared from its side for banking foray.

"We are ready. We have been working on this for quite some time... for about one and half years," Ghosh had said in an earlier interview.

While the process of granting new banking licences have been underway for quite some time, the government has recently indicated that a framework could be put in place soon for allowing new players in this business.

The RBI had issued draft guidelines in August 2011 for issuance of new banking licences, while in July 2012 it released the comments and suggestions received by it.

Religare group and Reliance Capital have shown their interest in starting new banks ever since a proposal was floated to issue new licenses.

L&T Finance, part of another leading conglomerate L&T group, also said that a banking licence would help it provide a complete range of products and services.

"L&T Finance Holdings has a vision of being a comprehensive financial services provider The banking license has a potential to enable us provide all products and services," L&T Finance Holdings' President and Wholetime Director N Sivaraman told PTI.

"Currently we are a lender with some other services, but with deposits and other banking services, we shall get to interact with all customers on all grounds and would wait for the final guidelines of RBI," he added.

Industry body Confederation of Indian Industry (CII) in a statement also welcomed the passage of the much awaited Bill.

"This will help pave way for RBI to give a nod to new banks in private sector as also attract investments in this important sector. With the growing financing needs of the economy, further strengthening of this sector would be of immense benefit," CII said.