Reliance, ONGC To Work Out Sharing Infra In KG Basin 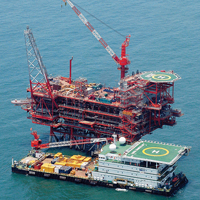 Reliance and ONGC will conduct a joint study over the next nine months to work out a formal agreement and firm up commercial terms, the two companies said late on Saturday.

Reliance, controlled by billionaire Mukesh Ambani, operates India's largest offshore gas field but has struggled with a slump in gas production over the past two years. It is estimated to have spent close to $8 billion to develop its blocks in the Krishna Godavari (KG) basin.

ONGC, which has also struggled to maintain production from its aging wells off India's west coast, hopes to produce from six to nine million standard cubic metres per day (mscmd) of gas by 2017 from its offshore east coast blocks, adjacent to Reliance's blocks there.

The agreement will minimise ONGC's initial capital expenditure and help in early monetisation of its deep water fields, ONGC Chairman Sudhir Vasudeva said in a statement.