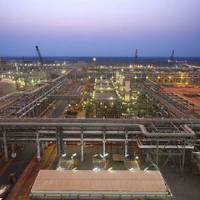 08 November, 2014
Print this article Font size -16+
Reliance Industries and its partner BP have shut a seventh well in the D6 block off the country's east coast due to sand and water ingress, bringing down the number of producing wells to 11, a source with direct knowledge of the matter said.

The well at D1 and D3 gas fields was shut about a week ago, the source said on Friday.

Gas production from D6 has declined to about 23 million standard cubic metres a day (mmscmd), the source said.

A Reliance spokesman declined to comment on the matter.

Production at the block may average 22.6 mmscmd in the fiscal year starting April 2013 and is projected to decline to 20 mmscmd in 2014/15, only about a third of the 60 mmscmd it produced in 2010 and well below the planned peak capacity of 80 mmscmd.

Reliance may have to shut under-performing gas fields in 2015-16, oil secretary G.C. Chaturvedi said in October, while Morgan Stanley analysts have said the key gas producing fields in D6 could be exhausted in 5 years.

Reliance brought in the British oil and gas company last year, which paid $7.2 billion to invest in 23 oil and gas blocks with the Indian firm, hoping its offshore expertise would help arrest the decline in output.

The D6 block, operated by Reliance, was expected to contribute up to a quarter of the gas supply for Asia's third-largest economy.

Reliance and BP submitted a revised field development plan in September, cutting the gas reserves in the D6 block by about two-thirds to 3.4 trillion cubic feet, the oil ministry said last month.

Reliance had government approval to drill 50 wells and had drilled only 22 with 4 turning out to be dry, the source said.

Canadian company Niko Resources owns 10 per cent interest in the block, while Reliance holds 60 per cent and BP the rest.