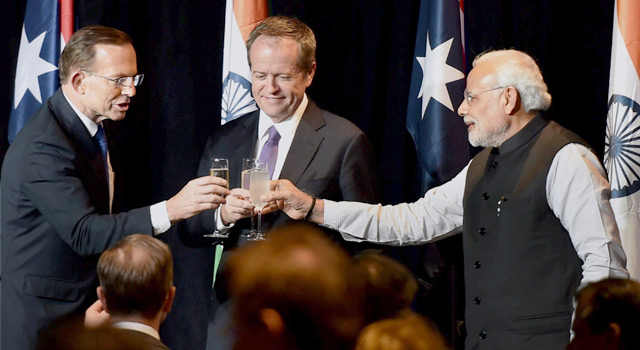 Modi, who held a roundtable with top Australian CEOs here, discussed prospects for bilateral cooperation specially in the field of education, services, energy, banking and information technology and tourism.

Modi, during the hour-long roundtable hosted by Victoria's Governor Alex Chernov at Government House, said India was open for business and was also keen to forge stronger business relations with Australia.

Noting that the new government has identified several areas of cooperation, Modi said there was a huge potential for developing educational ties especially at school level.

"Victoria has taken a good initiative of tying up with India. We have Youth. I would like to focus on two main area - one is research and the other is education," Modi said.

As Victoria was leading in the field of research, a collaboration in that area could be looked at, he said.

"We just launched our Make in India initiative and this presents opportunities in our country," he said, adding that issues of concerns for those keen to invest in India would be looked at in the next budget.

"Reforms are being undertaken to enhance ease of doing business," Modi said.

He welcomed the views and suggestions of Australian business leaders and said that those would be looked at positively.

"I have heard all your views in great detail. Democratic values connect us. Want to hear from you all," he said.

He invited Australian businessmen to collaborate with India in the field of green technology, LNG, gas and tourism sector.

Modi said that the government was keen to build cruise tourism.

"We discussed various issues, but the area which I would like to focus is tourism sector where I find several opportunities and possibilities," Modi said adding yesterday's announcement about visa on arrival facility for Australian tourists would also benefit business community too.

"I extend an invitation to look at this sector too," Modi said, noting that India's long coastline provides huge opportunities for developing the cruise sector.

Australia on Monday finalised a landmark free trade deal with China more than ten years in the making, significantly expanding ties between the world's second-largest economy and one of Washington's closest allies in Asia.

"We want to go further and that's why the next priority for Australia is a comprehensive economic partnership agreement with India," Abbott said.

"If I may say so, this is a moment in time. This is the time to get this done."

Modi, in an address to Australia's parliament, pledged greater cooperation on regional security.

"It has taken a Prime Minister of India 28 years to come to Australia. It should never have been so. And, this will change. Australia will not be at the periphery of our vision, but at the centre of our thought," Modi said.

He issued a veiled swipe at China over disputes with its neighbours over islands in the South China Sea.

"Our region has seen huge progress on the foundation of peace and stability but we can not take this for granted," Modi said.