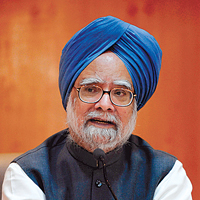 08 November, 2014
Print this article Font size -16+
The government, reduced to a minority for the first time since coming to power in 2004, is scrambling for support ahead of a parliament session that will severely test its economic reform agenda, and its chances of success look bleak.

For the moment, there is no threat of the government falling. But an obstructive opposition and unreliable allies could mean there is little progress on reforms like opening up insurance and pension businesses when parliament's month-long winter session gets under way on 22 November.

Prime Minister Manmohan Singh has engaged in unusual dinner diplomacy with allies at his New Delhi home to build consensus on the next round of economic reforms, which need parliamentary approval.

Criticised in the past for cold-shouldering allies and opponents, Singh also plans to dine this week with leaders of the main opposition Bharatiya Janata Party (BJP), whose obstructionist tactics washed out the last session. But analysts doubt he will manage to forge a consensus on the reforms.

"If things go awry, and legislation gets deadlocked it would be negative for markets and will mean those that were pessimistic on Indian reforms taking shape will be vindicated," said Suresh Kumar Ramanathan, head of regional rates and forex strategy at CIMB in Kuala Lumpur.

Analysts warn of a "nightmare scenario" in which the government loses a test vote in parliament on its flagship reform - opening up the retail sector to foreign supermarkets, a decision that has drawn fire from both opponents and allies who say it will destroy the livelihoods of mom and pop store owners.

The reform does not require parliamentary approval. But left- and-right-wing opposition parties, with an eye to upcoming state and national elections, want to use the session to hold the government to account on the policy, which they say does not have popular support.

They are pushing hard for a symbolic vote against the measure. If the government lost the vote, it would be an embarrassing setback for a policy on which it has staked so much political capital. It could also sap its political will to pursue more difficult reforms to cut high spending and reduce a ballooning budget deficit.

Most of the initiatives Singh has announced to date have required only an executive order, so this session of parliament poses the biggest test yet of his reform drive. If he fails to get key allies and the BJP on board, his reformist legislative agenda could stall.

Among the reform bills due to be introduced are measures to allow up to 49 per cent foreign investment in local insurance companies and domestic pension funds. Currently, the cap for insurers is at 26 per cent and foreign investors are barred from buying into pensions.

Uncertainty
Uncertainty surrounding the passage of these bills has contributed to a 3.8 per cent fall in the Sensex since the start of October.

The rupee, meanwhile, has shed all of its gains since the government launched its new economic reform drive in September. Analysts attribute the fall to a host of factors, including the global downturn, a ballooning deficit and fears that the promised reforms may not be fully implemented.

It was not clear whether the government would relent and allow the vote on retail reform to go ahead or if it would concede only to a motion allowing discussion of the move but not a vote, a less risky proposition.

Singh's biggest coalition ally, the Trinamool Congress party, has withdrawn its support over the reform, leaving him in charge of a minority administration at a time when he is trying to revive growth in Asia's third-largest economy.

Trinamool is pushing for a vote of no-confidence in the government during the winter session, which - if lost - could bring the government down and trigger a national election, well before it is due in 2014. For now, few opposition parties have the stomach for an early election, preferring instead to score political points by harrying a weakened government.

But the highly fluid situation means nothing is certain.

"We expect a rocky ride," Citi Research said in an analyst note that questioned whether the government would be able to pass legislation given its minority status, despite its insistence that it has done the maths and has the votes.

The economic bills can be passed in parliament's lower house with the support of two big regional parties - the Samajwadi Party (SP) and Bahujan Samaj Party (BSP) - which are not part of the ruling coalition but often give it support in parliament. However, the SP has previously opposed the pension and insurance bills while the BSP is keeping its cards close to its chest.

The government is in a minority in the upper house, so support from the opposition BJP is crucial there. But analysts say its unlikely the BJP will be willing to help its rival, which mean the bills could be tripped up at this last hurdle.