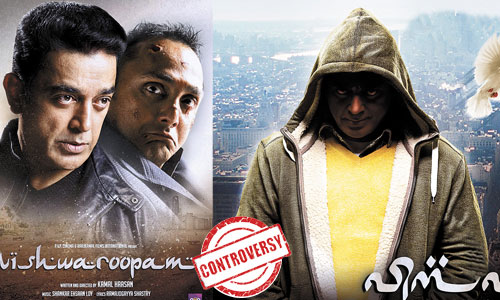 08 November, 2014
Print this article Font size -16+
The 95-crore film made by actor and film-maker Kamal Haasan seems to have spun its own real-life thriller off-screen. Vishwaroopam, a thriller about a Muslim RAW agent in New York, was supposed to have been released on 26 January (Republic Day) in south India. But owing to vehement protests by Muslim organisations accusing it of “tarnishing” Islam, Kamal’s home state Tamil Nadu (TN) stayed the release of the multi-starrer, leaving the fate of the movie hanging in the balance.
In frustration, Kamal said he would prefer to live in exile outside TN and, if need be, India, like the late artist, M.F. Husain.
According to Kamal’s close associates, the delays and uneven release in different markets have cost him about Rs 40 crore already. “Piracy might hit the film badly since the movie has been released in neighbouring states. The plan was to amass about Rs 300 crore through simultaneous launches on different platforms and the sale of telecast and audio rights,” one of the associates said.
Kamal had first planned a DTH release of Vishwaroopam on Tata Sky, Dish TV, Sun Direct, Videocon d2h, Airtel Digital TV and Reliance Digital TV on 10 January. He priced the one-time premiere at Rs 1,000 per home (Rs 500 for the Hindi version Vishwaroop). But theatre owners and distributors in TN revolted against the move.
Theatres in Andhra Pradesh and Karnataka have also restricted the movie’s screening. Some distributors in Hyderabad decided not to screen the Telugu version considering that the day of release coincided with the Milad-u-Nabi festival. Multiplexes in Bangalore decided against screening Vishwaroopam. Only in Kerala has the movie been released, drawing full houses.
The Central Board of Film Certification had approved Vishwaroopam for release and its chief, Leela Samson, said the row “amounts really to hounding”. Kamal, on his part, has met religious leaders and agreed to cut a few scenes from the film. “My Muslim family has reached out to me.

They came and told me which portions they want removed,” said the actor. But in an interview on news channel NDTV on Thursday, he said that he did not think that the film needed any further cuts. “I will speak to my Muslim brothers,” he said.
At the time of going to press, the film’s Hindi version had hit screens across the northern belt and Mumbai despite some opposition. Things seem to be moving in Kamal’s favour in TN as well, with chief minister J. Jayalalithaa clearing the air over the film’s ban. At a press conference on 31 January, she said if Muslim organisations and Kamal agreed on the deletion of objectionable parts, theatres in the state would be free to show the film.