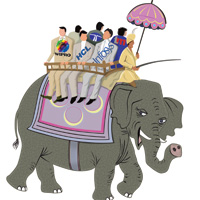 To use a sports analogy, it is like playing an ‘away' match on your home ground. That is the situation faced by India's information technology (IT) services sector's global players — Mumbai-based Tata Consultancy Services (TCS), Bangalore-based Infosys Technologies and Wipro, and Noida-based HCL Technologies. As they waltzed across the world, conquering frontier after frontier, they made one small, conscious decision: India was well left alone.

The reasoning was immaculate. Western markets, especially the US, offered big business, labour arbitrage (inexpensive Indian engineers working on US projects), foreign exchange benefits (earn in dollars or euros, spend in rupees) and bigger profits. The Indian market, in contrast, was not mature enough. Companies felt buying some computers and off-the-shelf software — such as Oracle's database management system or SAP's enterprise resource planning (ERP) — and hiring a few engineers to manage the infrastructure was good enough.

Come 2009, and two things changed. One, the western market slowed down dramatically, leading to tougher negotiations for billing rates and squeezed margins. And two, the Indian market hit critical mass. After registering a compounded annual growth rate (CAGR) of 18.57 per cent between FY2000 and FY04, the overall Indian IT market — comprising IT services, BPO, software products and engineering services, and hardware — grew at 24.83 per cent CAGR between FY05 and FY09. In between, in FY08, the market crossed Rs 1 lakh crore, growing further to Rs 1,16,784 crore in FY09. The growth has been symbolised by larger contracts — $200-million deals are more commonplace now, with $10-12 million deals the typical size earlier. According to Kiran Bhagwanani, HCL's senior vice-president in charge of India and the Middle-East, the scope of contracts is also expanding to include applications, infrastructure, and full life-cycle services. Ergo, India, albeit in a small way, with western markets still cornering a major share of revenues and attention.

In this flip-flop, one small detail was overlooked. "While Indians were looking westwards, MNCs saw that the next billion-dollar companies could come out of India, and it made sense to get into long-term deals with them," says a former IT head of one of India's largest private banks. The likes of IBM, HP and Accenture have not just serviced global clients from Indian shores, but have nurtured the Indian market as well, building up a ‘home' advantage.

There is one difference, though, between sport and business, one that augurs well for the Indian IT firms. Rather than being booed by the home audience for ignoring them earlier, India's home-grown IT champs are being cheered back. Why? Explains G. Srinivasa Raghavan, who heads national business of the $6-billion TCS: "Some Indian providers have become established brands, and that is prompting companies to look at them." Others feel while the foreign firms have serviced the Indian market for long, they have underachieved. And that perhaps explains why more and more of domestic IT outsourcing contracts are coming to Indian firms.

The Homecoming
The big deals started trickling in for Indian companies around 2007. Among the first notable wins was by TCS — a Rs 574-crore deal from BSNL to manage its hardware and software in north and west India, including customer relationship management (CRM), billing, directory enquiry, etc. Then, last October, TCS signed a deal with the Ministry of External Affairs for a Rs 1,000-crore passport automation project aimed at digitising passport services and reducing passport delivery time.

Infosys got going this January, when it bagged a Rs 250-crore contract from the Income Tax (I-T) Department to set up a BPO unit that would record tax details of citizens and answer tax refund queries. "We were late in entering the Indian market, but now we are talking to public and private sector entities for outsourcing contracts," says H.R. Binod, head of Infosys's India business. Then, this March, HCL netted a Rs 393-crore, end-to-end outsourcing deal from National Insurance Corporation — involving designing and maintaining current IT infrastructure. It was a big deal for HCL, which pipped its bigger rivals TCS and Wipro to the post.

So far, though, it has been Wipro that has bagged the spotlight. In January 2008, Wipro's India and Middle-East unit, Wipro Infotech, won a Rs 2,358-crore deal to manage telecom company Aircel's IT infrastructure, making it the first local vendor to win a deal in the coveted sector in India. Till then, IBM India had bagged most such deals, including the $750-million one from Bharti Airtel in 2004 that had set the ball rolling for big-ticket IT outsourcing deals by India Inc. Wipro followed up the Aircel deal by winning a deal this May — reportedly worth Rs 2,500-2,800 crore — from Unitech Wireless to deploy and maintain its IT infrastructure.

In between, in March, Wipro Infotech sealed a six-year, Rs 1,182-crore contract from Employees' State Insurance Corporation (ESIC). Wipro will be responsible for identifying ESIC's 10 million subscribers, and implementing an online solution to help them register, pay premiums and engage in other related activities.

Certainly, Wipro has a clear headstart over the others. While Infosys has less than 2 per cent of its business coming from India, Wipro's share is more than 17 per cent, and TCS slightly more than 7 per cent. Wipro Infotech's CEO Anand Sankaran says the recent wins by Indian companies point to an increased acceptance among Indian corporates and public sector companies.

Then, Tech Mahindra, a subsidiary of auto major Mahindra & Mahindra that acquired the tainted Satyam recently, plans to focus on niche verticals such as telecom and security. The Indian IT firms' case will no doubt be helped by the fact that the Indian market for outsourcing is maturing fast. Two things have contributed to this. First, MNCs and other, smaller Indian companies have been trying to drum into India Inc. for several years that managing IT took away resources and attention from their core activities. In a way, MNCs have helped make the market seem lucrative for the Indian firms. Second, fast technology changes invariably caught companies on the horns of a dilemma as to the right choice of technology. As a result: "Companies have begun to realise that managing IT is not their core competence," Sankaran says.

Take Idea, for instance. "When we got the (telecom) licence, we wanted to focus on expanding our customer base," says Managing Director Sanjeev Aga, resulting in its IT infrastructure being outsourced to IBM in 2007. Or take bike major TVS Motor. "We had to implement SAP to integrate our business processes," says T.G. Dhandapani, chief information officer, a solution implemented by Wipro Infotech.

"If you were to ask me the question of acceptance four years ago, I would have said MNCs had an edge, since they could push boxes (computers), provide system integration and offer consulting," says the CEO of a Bangalore-based outsourcing advisory company. But now, the scales have begun to tilt — analysts say most of these deals have been won by Indian companies in competition with MNCs such as IBM, HP and Accenture — and the Indian companies are pushing ahead to ensure that it stays that way.

Increasing Services Opportunity
Apart from telecom — which has become the centre of gravity for IT outsourcing both globally and in India, besting financial services — government projects have spawned the biggest outsourcing deals so far. And more is in the offing — from wiring states through WANs (wide area networks) to increased automation in utilities, railways and power departments to increased citizen programmes such as the identity card project, among others. For instance, executives from the National Institute of Smart Governance and National Rural Employment Guarantee Scheme are believed to have met IT companies and have earmarked $10 billion for various projects. "We see a big opportunity in rural banking as part of the financial inclusion move proposed by the Centre," says Raghavan.

So far, from the private sector, telecom has provided the biggest deals. Financial services — which includes banks, insurance companies, broking companies and so on — is another sector that holds potential for big deals. But here, the likes of Wipro and Infosys will have to contend with TCS and i-flex, whose Bancs and Flexcube software, respectively, are market leaders in core banking solutions in India. TCS, which has a tie-up with the State Bank of India, has plugged Bancs into more than 15 banks, while Flexcube has more than 20 installations to show.

But IT services players are hopeful that increasingly deals will start emanating from other sectors as well, including SMEs. "There is growing demand from mid-sized companies for services such as accounting and an ERP solution that is quick to deploy," says George Paul, executive vice-president of HCL Infosystems.

While there is market opportunity, building a sizeable India business will be anything but easy for India's IT firms.

Not An Easy Game
First and foremost, the MNCs, particularly IBM, are not about to go away. "We know how to manage projects in India," asserts Jyothi Satyanathan, vice-president for India and South Asia at IBM. "Since we have been in this market for over 10 years, it gives us a better perspective." The $103-billion giant made India the cornerstone of its strategy to transform what was a company that dealt mainly in huge servers to one that ruled the world's software services market. That IBM is alive and kicking was proven even as this article was going to press, with news of it bagging a Rs 80-crore deal from Amul.

Other companies such as HP, Accenture and Capgemini have also been around, so have companies hawking packaged software such as Microsoft and SAP. The latter two, in particular, have constantly attempted to trim their popular but bulky and expensive software to much smaller dimensions, to make them more affordable for Indian companies, especially the SMEs.

The overseas trump card for Indian IT firms also does not exist in India. "Mere cost-driven deals may not be as successful in India as in other markets as there is no labour arbitrage," says Gaurav Gupta, principal and country head of Everest Group, an outsourcing research firm. Billing rates on domestic contracts are lower than those on overseas ones, leading to lower margins. Besides, most Indian service providers have been unable to crack the big MNC clients, who typically have worldwide outsourcing contracts with a single, mostly MNC, vendor.

But industry watchers say the Indian companies are well up to the challenge. "Indian vendors understand the ecosystem better than MNCs, who often tend to approach them like clients in the West," says the head of delivery of a mid-sized Mumbai-based company. According to the IT head of a Mumbai-based brokerage firm, India Inc.'s IT heads have been befuddled by the pace of technological change, and MNCs, beyond selling boxes or packaged software, have not done a good job of helping them decide on appropriate technologies for their business.

Analysts say the arbitrage problem is really not a problem because the Indian companies are able to offer lower costs for projects. Reason: MNC vendors would not go below a certain cost base as it would impact their revenue per employee, which is higher than the Indians.

IBM, though, is confident of being ahead of Indian companies. "More than costs, it is a question of understanding the changing business requirements and how best an outsourcer can adapt to that," says Juhi Jotwani, vice-president of IBM Smart Business at IBM Systems and Technology Group, hinting at the opportunity SMEs would provide once their business grows and they need to scale up their IT infrastructure.

There is an interesting twist to this story. At a time when the Indian IT biggies have started making serious moves in India thanks to a global slowing in business, India's local IT services market has, almost on cue, crashed to a growth rate of just 5.58 per cent in FY09, compared to 42.51 per cent in FY08. Delicious irony? Perhaps, but the Indian companies will hope that it is not a case of bad luck following them around.