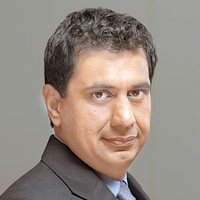 When Nimesh Shah took charge as managing director and CEO at ICICI Prudential Mutual Fund in July 2007, there was a perception among customers and market participants that it was not a general mutual fund, but one with niche products. To correct the perception and give investors the benefit of investing in a large-cap portfolio, the fund house decided to add ICICI Prudential Focused Bluechip Equity Fund (Focused Bluechip) to its bouquet of products. Four years on, Shah will not regret his decision as his fund has, in its very first nomination in the Businessworld-Value Research study of 2011-12, been adjudged the Best Equity Large-Cap Fund.

For a period of three years, the large-cap fund has delivered a return of 29.53 per cent, 1.5 per cent higher than last year's winner Franklin Bluechip Fund, which has to be content with a second-place finish this year.

Focused Bluechip has done well in both rising and falling markets in the past as well. And the credit for the success goes in large measure to Prashant Kothari who since inception nurtured the fund. In January this year, he was hired by London-based Pictet Asset Management to manage their Indian equity portfolio. The hire came on the heels of Pictet's Indian portfolio witnessing a fall of nearly 40 per cent in 2011.

"The aim is to beat the benchmark (Nifty) at any given point of time by keeping a concentrated portfolio of 20-22 stocks that have to be chosen from the basket of top 100 stocks," says Manish Gunwani, senior fund manager at ICICI Prudential Mutual Fund who has taken over the fund after Kothari's exit. The mantra, according to Gunwani, has been to deliver better returns than the relative sectoral stock in the Nifty and with minimum sector deviation, which has been restricted to 5 per cent either way.

In the last three months of 2012, the fund has reported a 12.26 per cent return, underperforming the benchmark Nifty that rose by 14.5 per cent. The fund is facing in-house competition from ICICI Prudential Top 100 and Top 200 funds, which have registered close to 19 per cent growth in the same period.

What is Gunwani's next move? "Today the market is neither in a bull phase nor a bear phase and the best strategy is to stay defensive. Though, going forward I am increasing the number of stock picks from 20-22 to 25-30 ," he says. Investors hope he retains the Midas touch of his predecessor.