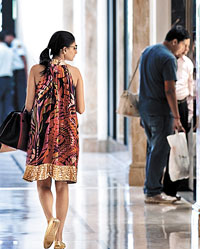 08 November, 2014
Print this article Font size -16+
Populism is popular in this country; it is also profitable in terms of votes, as demonstrated by the electoral success and fiscal bankruptcy of the current government. While it is not the best one might wish from a government, it is at least better than the selective favours and punishments that may be handed by a leader such as Nitin Gadkari, who has made his dislike of tax officials quite public. The populism of the Congress was given a shape by the National Advisory Council, especially by Jean Dreze and Aruna Roy, its more thoughtful members.
Roy is now pressing Sonia Gandhi for universal pension. She does not quite mean it; she means that it should be universal for 94 per cent of the population. And what is the crime of the 6 per cent minority? That has not been specified, but presumably it includes those who pay income tax. But they are not numerous enough. The number of income tax payers on 31 March 2011 was 3,35,79,831, or 2.77475 per cent of that day’s population of 121,01,93,422. Who else are caught in Roy’s net of disentitled is not clear. Perhaps she also counts income tax payers’ family members. That does not include those who live on agriculture. Although roughly a half of the labour force is employed in agriculture, the proportion of people who are well off would be lower than in the urban population. Adding them may raise the figure of 2.8 per cent to perhaps 4 or 4.5 per cent, but is unlikely to raise it to 6 per cent. Roy’s figure is, therefore, likely to be an overestimate. If, on the other hand, family members are included, the figure would go up to 20-25 per cent.
If she wants the pension to be “universal” to the 94 per cent, it is implicit that she is comfortable with other benefits not being universal. The government restricts them to those whom it regards as being below a poverty line. There are many poverty lines; each has its protagonists. But whichever poverty line is used, the government does not think that the figure of people below poverty line should exceed 75 or 80 per cent. If Roy accepts this view, it would follow that in her view, some 15-20 per cent of the population should get pensions but not the employment and income support the government gives to its chosen poor. She has an argument to justify this, that categorisation into those above and below the poverty line may make sense in respect of workers, but is irrelevant to those who have stopped working and earning. She does not explicitly mention those who have saved; they presumably fall in the 6 per cent who do not deserve a pension.
The government is reported to be against providing pensions to the 15-20 per cent because it believes it cannot afford the Rs 18,000 crore it would cost. This is a strange argument to use for a government which blows up something like 20-25 times that much on social programmes; if it does not mind spending lakhs of crores on such leaky, corruption-promoting programmes such as the Mahatma Gandhi National Rural Employment Guarantee Scheme and the Public Distribution Programme, why is it hesitating to spend a mere Rs 18,000 crore? Jairam Ramesh has been talking about giving pensions to young widows, single and divorced women, dalit and tribal senior citizens and disabled people; if these qualify in his view, what wrong have mere old people done that they must be excluded? The cost argument is the most trivial the government can use. After all, it finances a third of its expenditure by taking forced loans from banks and printing cash; it can sin a little bit more without feeling any more guilty.
A more intelligent argument it might have used against Roy is that only 75-80 per cent that are below its poverty line deserve anything; the rest are undeserving, even if they earn a rupee more than approved by the government. That may sound unfair to those single-rupee earners, but that is the will of the government. Social programmes are its gift to the people; those whom it favours should accept it thankfully, and the rest should mind their own business. That may sound reasonable to an all-knowing, all-wise government, but programmes that exclude people arbitrarily are likely to make it less rather than more popular. The Prime Minister has seen the justice of converting all benefits to cash; that is considerable progress for a populist. He may now perhaps see the reasonability of real universalisation — of extending all social programmes to the entire population irrespective of income. It will cost a little more since the well-off will not want the paltry benefits the government gives; but it will eliminate considerable low-level corruption involved in choosing and excluding beneficiaries.