Ready To Script A New Story 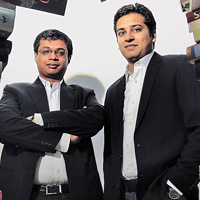 08 November, 2014
Print this article Font size -16+
If you love books and are comfortable with e-commerce, chances are that you have already bought something on flipkart.com. Or at the very least, you are familiar with its name. With over seven million titles in its inventory and over six million visitors every month, flipkart.com, founded in September 2007 by ex-IIT, Delhi graduates Sachin and Binny Bansal, is one of the most prominent online book retailers in India.

It all started in mid-2007 when the Bansal duo — they are not brothers — who both worked for Amazon for a while as software engineers decided to do something on their own. Amazon was the obvious inspiration and online retailing of books became the natural choice since as a startup with ambitions in the online trade, the Bansals had to choose a category that could facilitate getting started quickly and cheaply. Says Sachin: "It was easy to start off with books as the inventory management is far easier than any other product. The cost is lower."

Today, Flipkart is writing a new chapter in its saga. From being an exclusive books retailer, it is moving to other verticals such as music, movies, games and cellphones. With the e-commerce market growing significantly (at about 50-75 per cent for home shopping), the Bansals want a bigger share of the pie.

But this is unchartered territory, and retail of cellphones, especially, is full of pitfalls. Competition is tougher with nearly every online retailer selling them and inventory management is more challenging. The Bansals have a tough road ahead, and it will take them considerable time to perfect the model. Today, only about 15-20 per cent of Flipkart's revenues come from cellphones and accessories, while books, movies, music, etc. form the big chunk. Even in volumes, cellphones form a single digit percentage.

But the Bansals are scripting success. Flipkart has been growing exponentially and expects sales to cross Rs 100 crore this fiscal, from just Rs 5 crore in 2008-09 and Rs 20 crore in 2009-10. In comparison, Rediff does about Rs 60 crore of home-shopping business. Flipkart is also increasing its investment in infrastructure, and the number of warehouses will increase from the current four to 10 in a couple of years.

Growth At A Flip
Initially, Sachin and Binny, who both come from middle class families in Chandigarh, wanted to set up a comparison-based shopping engine. But evaluating the e-commerce market, they realised there was an opportunity in the books segment as nobody had a customer-centric model. Moreover, the online books business is a growing category. Consulting firm Technopak Advisors values the Indian book market at Rs 7,000 crore, growing at 8-10 per cent per annum. Industry insiders peg it at less than 1 per cent of the entire books market in the country.

The books business is a margins game, with margins between 80 per cent and 100 per cent. Hence, Flipkart, which gets books from publishers at a 25-40 per cent concession and sells them at a discount, is still able to make operating margins of 8-10 per cent after paying for logistics. Besides, it is a relatively risk-free business. Most publishers provide a 100 per cent return policy; if the books do not sell within a stipulated period, they can be returned, provided they are in a good condition. This ensures that the Bansals are not stuck with inventory.

Flipkart is now the undisputed leader in the online books retail category; it sells an average 5,000 titles every day, against a couple of thousand by Infibeam. But the ride has been bumpy. Initially, Binny and Sachin approached 15 publishers, out of which only two agreed to associate with them. It took them 10 days to sell the first book, remembers Sachin. Today, Flipkart has 500 publishers onboard and another 200 publishers are waiting to tie up with them. "It took us one year to get 15-20 publishers to be on our platform, but today we have a huge back-log. Initially, we chased them and now they chase us," exclaims Binny.

Like all other e-commerce websites, Flipkart too suffered due to the Indian customer's fear of buying online. Add to that limited credit card use, and the customer base was much reduced. The Bansals introduced ‘cash-on-delivery' and tied up with several courier companies and even the postal department to overcome that hurdle. They have now started a pilot in Bangalore where they have their own people doing the delivery. "Solving last-mile delivery is the biggest challenge. Now, our staff will deliver the book and pick up the cash. This will ensure delivery either on the same day or maximum within two days," says Binny. Flipkart plans to replicate this model in other metros and also smaller towns.

Another problem faced by Flipkart initially was of funding. Investors were not willing to experiment and fund e-commerce players, and Flipkart was no exception. "E-commerce had not worked in India, so venture capitalists (VC) were apprehensive," says Sachin. Yet, Flipkart clocked robust growth, and became profitable and self-sustainable in six months.


That was when the Bansals roped in their first round of funding from Accel Partners. Then, in the first quarter of 2010, they got a second round of funding — about $8-10 million — from Accel and from Tiger Global Management, a New York-based investor. "When we invested, we did not even look at their numbers. The founders had a good background of books as a category," says Subrata Mitra, partner at Accel Partners.

The Indian Bazaar
When Flipkart started in 2007, the online books retail category in India was largely untapped. But today, the space is different. A large number of new players such as Infibeam are also selling books and that too at discounted rates.

However, what distinguishes Flipkart from most other Indian online players is that almost all the other known names are platform-based — websites enabling third-party vendors to sell their goods online. As a result, price and quality are not in the hands of the host site, and it does not maintain an inventory.

On the other hand, a book ordered from Flipkart is sold by them — almost like an online version of a bookstore. Flipkart only sells its own warehoused products and is completely inventory managed. While it stocks books that have a high demand, others are sourced from the supplier only when it receives an order for them. "Flipkart's business model is good and (it) is in a niche. If the market size increases, (other) people will also have to keep inventory," says Ajit Balakrishnan, founder & CEO of Rediff.

Though keeping inventory makes delivery faster, it also exposes Flipkart to high risks of inventory blockage. This wasn't a problem as long as Flipkart was only dealing in books. The ticket size is small, and prices do not fall drastically. The firm will have to now consider inventory blockage, as cellphones are a highly volatile product. Prices fall drastically and inventory management becomes a big issue. But Binny says they have an idea of which mobiles would sell more and stock accordingly.

Further, competition in the cellphone space is extremely tough. Mobile phones are sold by every second e-commerce site. According to market estimates, about 60 per cent of the goods sold through online shopping are consumer durables with cellphones making a major chunk of it. Moreover, global biggies such as eBay, with their financial muscle and understanding of the online retail model, prove to be tough competition for the likes of Flipkart, believe analysts. "We are in India, so that customers can get a wide variety of goods," says Ambareesh Murty, country manager of eBay India.

Amazon too has been doing due diligence on India for over two years now. It has been trying to enter the market either directly or through a tie-up. If Amazon enters the country, problems may increase for Flipkart. But Sachin thinks differently. "It will take them a long time before they understand the challenges of doing business in India. Throwing a lot of money here does not help. So, we have an advantage," he says.

Road Ahead
Jessie Paul, managing director of marketing advisory firm Paul Writer and the author of No Money Marketing believes that Flipkart has the potential to become India's Amazon. "If Flipkart gets another two-three years, it will create a brand for itself and might co-exist with Amazon (rather than tie-up with the incumbent online giant)." But Binny is quite frank with the upcoming problems that Flipkart might face if the business has to grow three to four times every year. "One big challenge is to add more categories, while keeping focus on existing categories (here, books and mobile)," he says.

The other challenge is logistics. Explains Infibeam's Vishal Mehta, "Logistics is a very fragmented business. One has to work with big players (such as Blue Dart Express) and also with smaller courier players in smaller cities." Flipkart hopes its pilot project in home turf Bangalore, which it plans to take to other cities, could help it solve the problem.

Further, many, such as Harish Bijoor, CEO of Harish Bijoor Consultants, a marketing consulting firm, believe that books are a good category to begin with, but it is a very niche sector. Moreover, if the business of online book-selling has to increase exponentially, one has to get into tactile examples such as digital look and feel of the book such as those provided over an iPad or any other e-reader. Amazon has itself manufactured the e-reader Kindle, which sells in good numbers. India's Infibeam, which has more than 500,000 titles has also manufactured its own e-reader Pi and now a tablet, Phi. Flipkart has no such plans in place.

But the Bansals know if they want to maintain their leadership, they have to invest in the back end. Sachin admits it is their weakest link. "Most of the VC money is going to be put into strengthening the back end. We are also building warehouses in major cities in India."

Long Way To Go
Technology is another factor that will play a big role in Flipkart's growth, and the Bansals have great plans for it. They have an in-house team of 50 software engineers and the total back-end technology framework is made in-house. Today, about 40 per cent of the revenues go into technology investment. "The expenses are high as we are still building the platform, but as we scale up, the costs will reduce," explains Binny.

In spite of the success, Flipkart still has a long way to go. Slowly, it will have to open up to third party-reselling and become a platform company such as Amazon. Flipkart can do this only after it has got the desired traffic on the website, or it won't be able to provide enough value to the reseller. Moreover, as their product portfolio increases, the firm's inventory management systems should also be scalable and capable of hosting a large amount of inventory.

Unlike many, the Bansals say they are here for the long term and not simply to get a good valuation and exit the business as in case of many startups. "We want to be the largest retailer (online and offline) in India, and it will be foolish to exit," explains Binny.

Flipkart may or may not become an Amazon, and Sachin and Binny may not be Jeff Bezos, but at least in India, the online retailer has won the first round. Today, it is cheaper to order foreign books from Flipkart than from Amazon, unless you group them and save on shipping fee. It is also quicker, as Amazon takes 4-6 weeks, while Flipkart delivers within 1-3 weeks. The final chapter in this saga is still to be written.