Ready To Be Seduced? 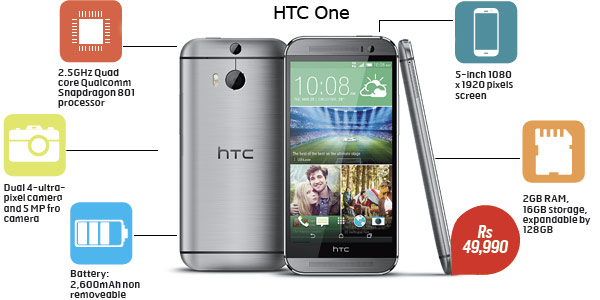 08 November, 2014
Print this article Font size -16+
We have a beauty on our hands. After the iPhone, it’s really the HTC One that has been admired for its design — and the new version, also called the M8, takes its seduction-by-metal philosophy further. It’s larger than its 4.7-inch predecessor and the edges are rounded to make it easier to hold. From the front, it’s the signature HTC look, with chamfered edges and the speaker grills up top and bottom. These give the HTC One its Boom Sound, easily the best audio experience on a smartphone, if you don’t use external speakers. The full-blooded, rich sound adds wonderfully to the avid consumption of videos, music and movies that this country is so sold on.

The back of the HTC One is smooth as silk. It’s got that brushed metal look and is wonderful to the touch. The phone is supposed to be 90 per cent metal, according to HTC. The problem is though that it’s so smooth it can just glide and ooze out of your hand and crash to the floor. So many reviewers report having dropped it that I clutch it extra tight at all times. It’s sad that such beautiful phones end up having to be put into cases, but that’s a fact and best if you want to protect it as much as possible.

The M8 isn’t just about beauty though. It’s got top-end specs and is slow at nothing. HTC’s Sense 6 interface works with Android 4.4.2 for a light and smooth experience. In fact it’s on the beauty and smoothness front that the Galaxy S5 compares unfavourably with it, sporting the usual Samsung look and using the TouchWiz interface that is full of tricks but invariably slows things down.

It’s on the features front that the Galaxy S5 beats the M8 — and just about any other smartphone. Now that it works with a smartwatch, the S5 has enough to keep a user occupied until the next version comes around.

But that’s not to say the HTC One is low on features. It doesn’t have the same kind of multi-tasking for example, but it does have a beautiful implementation of its Blink Feed, the news feed style content consumption feature that you access with a mere side-swipe. Samsung too has an equivalent now, but HTC, who originated it, does a finessed job of it as it does with everything else on the device. You can tap twice to wake it up, circumventing the annoyingly placed power button on top, lift the phone to receive a call, and more.

A distinctive feature of the M8 you can see on the back is the camera. As before, it’s a 4 megapixel — or rather, “ultra-pixel” shooter, designed to let in more light. But it’s also a “dual camera” with one portion dedicated to quickly capturing additional information such as the distance of the objects around which then helps to achieve that bokeh look. It sounds very impressive, but when you get down to it, it’s a mixed bag. The photographs you take indoors are actually filled with light and not blurred out or noisy. Outdoors, there just isn’t enough detail and clarity on distant objects or zooming in. It is, after all, all of four megapixels and although megapixels never tell the whole story, they’re needed if you want big detailed pictures.

But everyone does not in fact want picture-perfection. Many users are more interested in casually taking a shot and uploading it. For that, the camera does fine, as does the 5MP front camera, especially there for selfies.

So, to sum up the cameras — fun for casual shooting, “Zoe” music-and-movement shows and indoor pics. Not so great for high- end phone photography for which Nokia’s 1020 is currently the best.

There are rumours that higher-end models of the M8 are on their way, sporting a 13MP camera. There may also be a ‘mini’ variant.
(This story was published in BW | Businessworld Issue Dated 30-06-2014)
Tags assigned to this article:
magazine more 4 htc pyramidmagazine 11 april 2011 13 feb 2012 magazine 30 june 2014 htc one m8 htc blinkfeed samsung galaxy s5 asus transformer book trio asus tx21la-cq003p intel atom