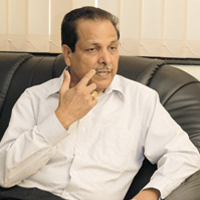 Life looks mellow as ever at the 55-year-old idyllic factory of Bharat Electronics (BEL) in Bangalore, the first and biggest among its nine factories. Its mostly middle-aged workforce goes about its routine with a placid purposefulness. But the apparent calm hides a sense of unease.

The government has become more open to sourcing defence items from outside the public-sector defence production set-up. Cast in a technocratic mould in the Nehru-Indira era, BEL is now trying to come to terms with a changing world where instead of getting work and money delivered at its doorstep, it will have to jostle with private Indian companies and defence multinationals to stay in business.

The new chairman and managing director of the company, Ashwani Kumar Datt, who took charge this June, has sent down a clear message to the rank and file that it is time to wake up to a new organisation objective and culture or risk becoming marginalised. "People at BEL have got used to doing things in a particular way over time, but now BEL has to fight hard to hold its turf in defence electronics business," says Datt. "That is putting pressure on everybody in the organisation."

Competitors believe BEL would not stand up to competition for a day if the government withdrew its protection to the company. "BEL lacks in-house design capability, and mostly does assembly job with imported technology and components. That capability can be easily replicated in the private sector," says Rahul Chowdhary, CEO, Tata Power's Strategic Electronics Division. Agrees I.V. Sarma, director of R&D at BEL. "The entry barriers to electronics manufacturing and software are low," he says.

It is not too hard for the BEL staff to appreciate Datt's message, having seen the fate of the Hindustan Machine Tools (HMT) and Indian Telephone Industry (ITI), two other Bangalore PSUs, which slipped into insignificance once the government exposed them to competition.

But understanding is easy, changing is hard. "The biggest challenge is to get people to think like businessmen, and not just like national champions," says M.L. Shanmukh, director of human resources at BEL.

Datt is trying to nudge the company into a different orbit without any violent tugs or thrusts. "There is plenty of good in BEL's legacy that needs to be preserved, such as the accumulated capability in defence system integration, the knowledge of the existing products and a close working relationship with the forces," he says. "At the same time, there are new requirements such as marketing and system designing savvy."

Proactive R&D
Historically, BEL ended up making obsolete products as it had to create indigenous versions of latest products that were denied to India by the western powers. Usually, it took five-seven years to develop and deploy the required products, and in that period, the technology moved up a generation.

"Now with global tendering in practice, if we do not have the product ready with us, we will lose the order," says Sarma. So, he has prepared a blueprint to ensure that BEL leads the forces' requirements rather than following those.

The company has doubled its R&D budget this year from the traditional 4 per cent of the revenues, and plans to sustain it at that level.

Datt wants the R&D to enable BEL to enhance its value addition by undertaking more complex and valuable projects . Currently, the import content in the systems delivered by BEL is fairly high — 50 per cent to 80 per cent in most products. Datt wants to see that threshold drop to below 30 per cent — not so much by making more components in-house, but by enhancing the in-house design effort.

Priority Areas For R&D
Besides communication systems, radars and electronic warfare (EW), which together contribute about two-third of BEL's revenues, the company has identified electro-optics, command-control-communication-computer-and-intelligence (C4i) systems, tank electronics and submarine warfare as its high-priority areas for system-integration level R&D.

One example of such proactive development is a software-defined radio communication system for the army. According to H.N. Ramakrishna, general manager of military communications, this radio allows the user to programme frequency of choice and set the number of channels. BEL is developing this product in partnership with Defence Research and Development Organisation (DRDO). Sarma plans to put this radio in the field in 30-36 months.

Other forward-looking development programmes of BEL include the new tactical communication system (TCS) required by the army, data-fusion system to integrate information from multiple sensors on separate assets, and airborne electronic warfare systems on MiG-27, MiG-29, the ‘indigenous' LCA and the upgrade of the Jaguar's EW systems.

The Marketing Vacuum
"We need to strengthen our marketing to generate appropriate market leads to help our R&D put us in the pole position in the race for future orders," says Datt.

N.K. Sharma, the marketing director, points out that until recently BEL had no need for marketing. "When you are the only one in the country with defence electronics R&D and production capability, then the market is yours," he says.

Ramakrishna, who will take charge of marketing in August when Sharma retires, would like to engage with the forces proactively and work on products they would want in future.

Moulting The Minds
Shanmukh, the HR director, has the most daunting of the tasks in this transformational effort. He has to reorient almost 11,000 employees with an average age of 50 years.

So, to quickly inject fresh ideas, approaches and competencies, Datt and Shanmukh are looking to laterally hire people on five-year contracts from the forces to bolster the R&D and marketing teams. Also, Shanmukh is devising training programmes to make BEL managers think creatively. "Earlier we created managers, but now we are trying to create leaders," he says

One sign of the changing mindset in this previously insular organisation is the oft-repeated theme of co-opting the competitors to neutralise the competition.

Partnering The Enemy
"We do not have to necessarily compete with the foreign companies or private Indian companies," says Sharma, the marketing director. "We can dovetail their expertise with ours to service our customer."

BEL is already working in a consortium with Tata Power and L&T on the Akash missile programme. The private duo are making the missile's launcher and BEL is integrating the launcher and the Bharat Dynamics-made missile with its radar.

The company is also discussing outsourcing or alliance deals with private software companies for satellite communication elements for the tactical communication system it is developing. HCL and TCS are in the fray for that.

Many private companies, however, have the ambition to become prime vendors. They blame lack of opportunities on the government's bias for public sector undertakings (PSUs) such as BEL, and the excise duty exemption for the PSU that puts private companies at a 10 per cent disadvantage in pricing. BEL scoffs at such crib, and stresses that it is because of lack of capability in the private sector and a history of the company's delivering and servicing products, even at a loss and even in war theatre, that keeps the customer keep coming back to it.

Consulting firm PricewaterhouseCooper's aerospace and defence expert Dhiraj Mathur agrees that the private sector lacks the requisite capabilities at present. However, he blames it on the lack of opportunity. "It is a chicken and egg case — private companies cannot get big system integration orders without investing in capability, and without orders they cannot invest against just hopes," he says.

BEL is leveraging its advantageous position to sew up joint ventures and alliances with key technology owners globally. At the moment, it is trying to forge one with Raphael of France for defence electronics, especially the avionics. It has signed an agreement with Boeing of the US to set up a product performance simulation lab in India.

The Offset Gambit
In addition to such tie-ups with the multinational companies, BEL is also angling for contract manufacturing work from those foreign firms that will have to spend 30 per cent to 50 per cent of their revenues from large Indian defence orders within India, which is better known as the offset obligation.

BEL's export manufacturing unit, which currently makes MRI and X-ray machine components for GE and Siemens, recently got a request from Northrup Grumman to make samples of some mechanical and electrical parts of fighter aircraft. BEL is also negotiating a manufacturing contract with Lockheed Martin (LM) for RFID systems used for tagging and tracking the stored and mobile ammunition and weapons. LM has an offset obligation against its $1.1-billion sale of six C130J military transport aircraft to India.

The Future
Datt is sanguine about the prospects of his company, provided it can achieve the transformation it desires. "It is now a one-way traffic towards electronics-driven warfare," he says. With sensors, communication networks and data fusion driving decision-making and weapon-firing, and Indian forces set for a once-in-an-era modernisation, BEL is at the right place at the right time. The pie is getting bigger, and Datt is not too worried about losing a few orders here and there.

"Competition is doing us a world of good," he signs off.