Re Slumps Below 61 Against Dollar, Sensex Dips 263 Pts 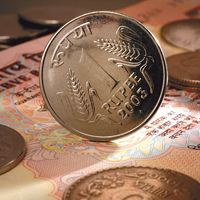 08 November, 2014
Print this article Font size -16+
After slumping to a new record low of 61.19 against the dollar in early trade, the rupee recovered a bit to 61.04 in late morning deals on suspected intervention by the Reserve Bank.

The rupee fell by a massive 97 paise to breach the 61-mark to 61.19, a new all-time low, against the dollar in early trade at the Interbank Foreign Exchange market, on heavy demand for the American currency amid capital outflows.

Forex dealers said there was some dollar selling by public sector banks on the behest of RBI.

Persistent dollar demand from banks and importers triggered by strong US currency in the overseas market mainly weighed on the rupee, amid sharp fall in local equities, they added.

In New York market, a key gauge of the US dollar's value rose in the early trade holding its grip on a three-year high amid heightened expectations that the US Federal Reserve will slow the pace of monetary stimulus later this year.

Forex dealers said dollar firming up against other currencies in overseas markets, mainly put pressure on the domestic currency to touch an all-time low. The local currency had plunged to 60.76 intraday on June 26.

The rupee had declined by nine paise to 60.22 on Friday and the fresh fall was led by a steep rise in crude oil prices which surged over USD 100 in overseas markets.

Sensex Down 263 Pts In Early Trade
The BSE benchmark index Sensex today fell by nearly 263 points in early trade on profit-booking by funds at prevailing higher levels amid a mixed trend in the Asian region.

In the Asian region, Hong Kong's Hang Seng index fell by 1.98 per cent, while Japan's Nikkei Index was up by 1.27 per cent in early trade.