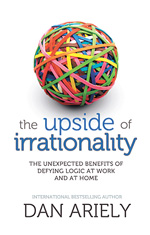 Dan Ariely is a behavioural economist and academic. His earlier book, Predictably Irrational, made an impact on behavioural studies. His new work, The Upside Of Irrationality: The unexpected benefits of defying logic at work and home, takes off from the earlier book. The book is based on ideas built on limited samples. The purist in me has always doubted the greater validity of small- samples studies in management thought. And initially I felt this sort of limited the relevance of Ariely's work. After all, how much of human behaviour can be extrapolated based on studies carried out among small populations of students in US graduate schools? But the prejudices wane out as we go deeper. Ariely's persuasive thinking is reflected in his ideas and experiments.

Ariely's ideas are remarkably simple, and he puts them into small experiments, giving them the right perspective. He asks: why do we not do difficult, short-term, negative-effect tasks (such as painful injections) for long-term, positive effects (like recovering from a disease? This does, to an extent, become the leitmotif that Ariely builds the book around, along with the fact that we are not as rational as we believe we are. And, therefore, we don't always act in our best interests.

The book looks at issues such as how we demotivate teams around us by our behaviour; the concept of ‘adaption' and how we adapt to situations over time; how we reprioritise attributes in order to achieve a result (‘speed dating', for example); the Ikea effect (when you create something, the pride in creating it and the attachment are likely to give you an inflated sense of its quality); why we claim our ideas are better than anyone else's; how emotion impacts our decision making (in, say, donations) and, importantly, how revenge can create issues in decision making (Ariely jokes how he took revenge when he wrote a HBR article on poor service, alluding to the car manufacturer he had a problem with!)

There are more: why do we keep paying bankers larger bonuses for jobs not well done? Could the 2008 implosion at Wall Street have been avoided if there had been enough thought in the decisions taken? Can we be better managers at the workplace (and better parents at home) if we understand how our decision making is made and how we can reduce the influence of our behaviour ( or at least understand it ) on our fellow workers and families? Those are good food for thought indeed.