Ranveer flaunts new hair-do by Deepika, says 'I like it'

Ranveer flaunts new hair-do by Deepika, says 'I like it'

Mumbai (Maharashtra) [India], July 20 (ANI): Actor Ranveer Singh on Monday flaunted his new hairstyle made by beloved wife Deepika Padukone.
"Hair by: @deepikapadukone," wrote the 35-year-old actor on Instagram as he shared his picture in the new hair-do on Instagram. The 'Ramleela' actor said that the hairstyle is identical to Japanese actor Toshiro Mifune from his 1961 samurai film ' Yojimbo' (bodyguard), and confessed that he liked the hairstyle and asked his fans if they liked it too. He added, "Very Mifune in 'Yojimbo'.I like it. What do you think?" 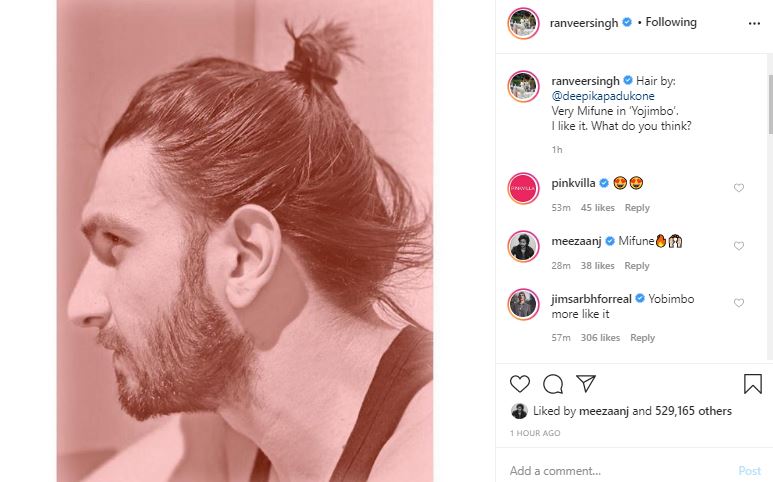 In the capture, the 'Gunday' star is seen giving a side pose as his hair is seen tied in a small messy bun while some of his hair fall down on his nape. Ranveer looks charming in his new hairdo, as he is seen in the hues of the pink filter and carries a beard look in a black vest.
Celebrity followers were quick to react over the post that garnered more than 52 thousand likes within 49 minutes of being posted.
Meezaan Jaffrey left the fire and raising Hands emoji.
While Jim Sarbh and Manvi Ghagroo too praised the new hairdo.
Lately, the 'Lootera' actor has been keeping his fans updated of his activities by sharing pictures and videos on the social media platforms. (ANI)