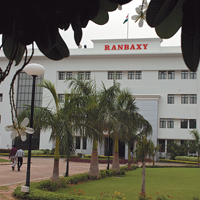 08 November, 2014
Print this article Font size -16+
Ranbaxy Laboratories, India's largest drugmaker by sales, reported a 90 per cent drop in first quarter net profit compared to the same year-ago period, when it had exclusive rights to a generic version of cholesterol lowering drug Lipitor in the United States.

Shares in Ranbaxy were down 1 per cent at 2:02 p.m.. The stock is down nearly 11 per cent this year as compared to 2.4 per cent rise in Mumbai market.