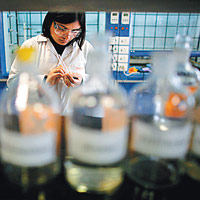 08 November, 2014
Print this article Font size -16+
Generic drugmaker Ranbaxy Laboratories pleaded guilty on Monday to felony charges related to drug safety and will pay $500 million in civil and criminal fines under the settlement agreement with the US Department of Justice.

The settlement has been in the works for some time. In December 2011, Ranbaxy set aside $500 million to resolve the potential criminal and civil liabilities related to the investigation by the government into its manufacturing practices and falsifying data.

The company reached a related settlement agreement with the US Food and Drug Administration in 2011.

"The financial provision Ranbaxy established in December 2011 will be sufficient to cover all material financial obligations under the agreement," the company said in a news release announcing the conclusion of the U.S. investigation.

Ranbaxy USA pleaded guilty to three felony counts related to the manufacture of drugs at two Indian locations that did not meet safety standards and to four counts of making material false statements.

In the civil settlement, Ranbaxy has agreed to pay $350 million to resolve allegations that drugs from the two Indian plants did not meet specifications and that false claims were submitted to US government healthcare programs between 1 April 2003 and 16 September 2010.

In 2008, the FDA banned the company from selling about 30 drugs in the United States after it found manufacturing deficiencies at facilities in India. In 2009, the FDA had accused the company of falsifying data and test results in drug applications and halted reviews of drugs made at a plant in northern India.

Dinesh Thakur, former Ranbaxy director and global head of research information & portfolio management, is entitled to $48.6 million as the whistleblower in the case, the Justice Department said. It was Thakur who uncovered the unsafe practices and violations at Ranbaxy.

"Ranbaxy's management was notified of these widespread problems. When they failed to correct the problems, it left me with no choice but to alert healthcare authorities," Thakur said in a statement.

"It took us eight years to help government authorities unravel a complicated trail of falsified records and dangerous manufacturing practices that threatened to compromise the quality and safety of Ranbaxy drugs," he added.

Ranbaxy, majority-owned by Japan's Daiichi Sankyo, stopped selling drugs to the US markets while it fixed problems with its manufacturing procedures in the United States and India.

""While we are disappointed by the conduct of the past that led to this investigation, we strongly believe that settling this matter now is in the best interest of all of Ranbaxys stakeholders," Ranbaxy Laboratories CEO & Managing Director Arun Sawhney said. "The conclusion of the DOJ investigation does not materially impact our current financial situation or performance," he added.

The company has since grappled with other manufacturing problems. In November 2012 it recalled some generic Lipitor, known as atorvastatin, in the United States after certain batches were found to contain glass particles. It has since resumed manufacturing the widely used cholesterol lowering medicine.