New Delhi [India], January 26 (ANI): Ace actor Rana Daggubati marked the occasion of the 72nd Republic Day by penning down a heartfelt note, saluting the braveheart soldiers of India.
The 'Baahubali' actor extended his warm wishes to the 'jawans' by sharing the heartwarming letter on Instagram.
"MY SALUTE TO THE JAWANS AND A HEARTFELT THANKS FOR THEIR WARM WELCOME
This Republic Day, I am filled with a renewed sense of respect for our country's armed forces," Daggubati's post read.
The 36-year-old actor then shared that the "feeling" of respect has "lingered on" with him after he spent some time with the BSF troops in Jaisalmer for a documentary with Discovery Plus. 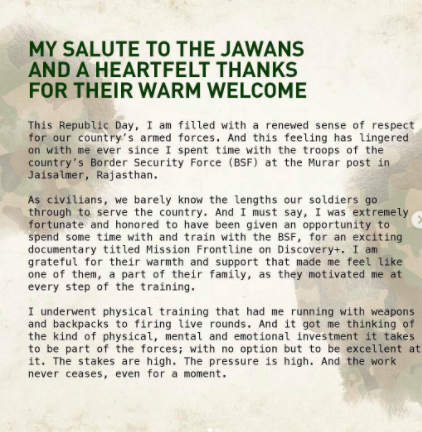 "And this feeling has lingered on with me ever since I spent time with the troops of the country's Border Security Force IBSF) at the Murar post in Jaisalmer, Rajasthan. As civilians, we barely know the lengths our soldiers go through to serve the country," he wrote.
"And I must say, I was extremely fortunate and honored to have been given an opportunity to spend some time with and train with the BSF, for an exciting documentary titled Mission Frontline on Discovery," he added.
The 'Dum Maaro Dum' actor also expressed gratitude for the "warmth and support" with which the soldiers helped him in his training for the project. 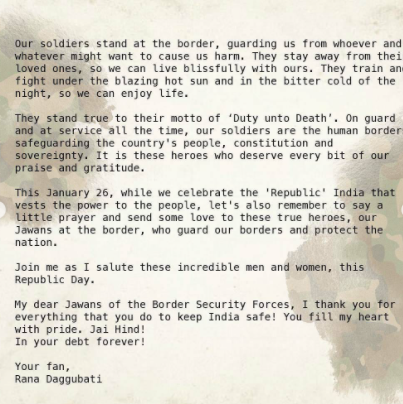 "I am grateful for their warmth and support that made me feel like one of them, a part of their family, as they motivated me at every step of the training. I underwent physical training that had me running with weapons and backpacks to firing live rounds," the 36-year-old actor wrote in the post.
"And it got me thinking of the kind of physical, mental, and emotional investment it takes to be part of the forces; with no option but to be excellent at it. The stakes are high. The pressure is high. And the work never ceases, even for a moment," he added.
In the rest of the post, the 'Ghazi' actor continued heaping praises on the soldiers of the country.
"Our soldiers stand at the border, guarding us from whoever and whatever might want to cause us harm. They stay away from thei loved ones, so we can live blissfully with ours. They train am fight under the blazing hot sun and in the bitter cold of the night, so we can enjoy life," Daggubati wrote.
"They stand true to their motto of 'Duty unto Death'. On guard and at service all the time, our soldiers are the human border safeguarding the country's people, constitution and sovereignty. It is these heroes who deserve every bit of our praise and gratitude," he added.
He ended the letter by urging everyone to celebrate the "Republic India" by remembering the soldiers with a "little prayer" and by sending love to the "true heroes."
"This January 26, while we celebrate the 'Republic' India that vests the power to the people, let's also remember to say a little prayer and send some love to these true heroes, our Jawans at the border, who guard our borders and protect the nation," he wrote.
"Join me as I salute these incredible men and women, this Republic Day. My dear Jawans of the Border Security Forces, I thank you for everything that you do to keep India safe! You fill my heart with pride. Jai Mind! In your debt forever! Your fan, Rana Daggubati," he added.
Several Bollywood celebrities including Amitabh Bachchan, Priyanka Chopra, Kangana Ranaut, among others, also took to social media to extend Republic Day greetings to their fans and followers.
Republic Day is celebrated in India every year on 26 January to commemorate the day the Constitution of the nation came into effect. Though we gained independence on August 15, 1947, nascent India did not have its own laws which were drafted and finally adopted in the year 1950. (ANI)