Darjeeling (West Bengal) [India], October 25 (ANI): Defence Minister Rajnath Singh on Sunday asserted that he is confident that Indian Army will not let anyone take even an inch of our country's land.
Singh made these remarks after performing 'Shastra Puja' at Sukna War Memorial in Darjeeling, West Bengal. Army Chief General Manoj Mukund Naravane was also present at the occasion. 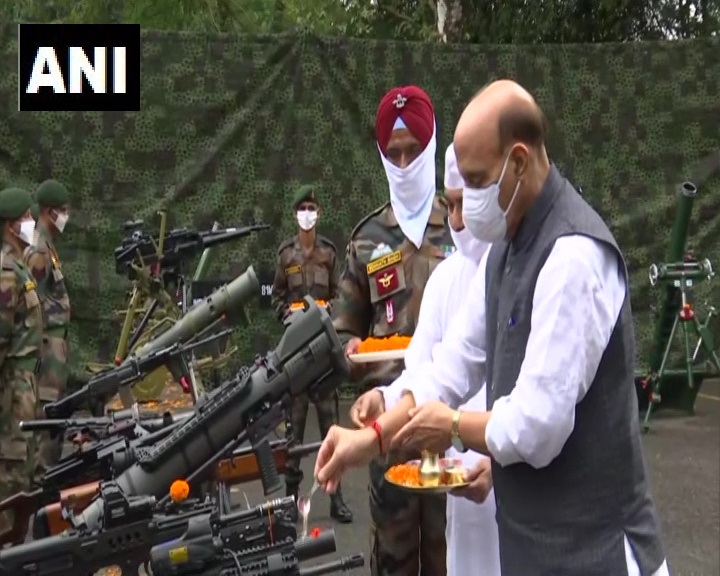 "India wants that the Indo-China border tension should end and peace should be preserved. It is our goal, but sometimes, nefarious activities take place. But, I am fully confident that our army will not let anyone take even an inch of our land," Singh said while talking to media.
Singh also inspected a Tavor assault rifle at Sukna War Memorial in Darjeeling.
"Whatever happened at Indo-China border at Ladakh recently and the way our Jawans responded bravely, historians will write about the valour and courage of our jawans in golden words," he added.
On Saturday, Defence Minister as part of his two-day visit to West Bengal and Sikkim visited the Headquarters of 33 Corps at Sukna in Darjeeling and reviewed situation and preparedness in the Eastern Sector.
Singh also greeted the soldiers on the occasion of Dussehra.
The Defence Minister is on a two-day visit to West Bengal and Sikkim. He will visit forward areas and interact with troops. He will also inaugurate an infrastructure project build by BRO, during his visit.
India and China are engaged in a standoff since April-May this year starting from Ladakh to Arunachal Pradesh in Northeast. India has deployed close to 60,000 soldiers to counter the Chinese Army which first moved troops to transgress into Indian areas in Pangong Lake and other adjoining locations. (ANI)
.