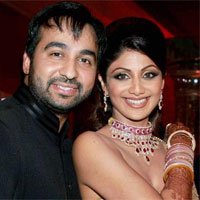 08 November, 2014
Print this article Font size -16+
The IPL betting scandal took a further twist on Monday 10 June 2013 when Rajasthan Royals co-owner Raj Kundra was suspended by the BCCI on charges of gambling during IPL VI matches. Meanwhile, Ravi Sawani's report on the spot-fixing scam was forwarded to the Board's disciplinary panel in an Emergent Working Committee meeting here.

"The Working Committee today decided to suspend Raj Kundra on allegations of gambling on IPL VI matches till the pendency of inquiry," a senior working committee member and BCCI office-bearer told PTI.

"Kundra will be debarred from taking part in any cricketing activity related to Rajasthan Royals which effectively means that he won't be seen during Rajasthan Royals matches in the upcoming Champions League Twenty20 in September," he said.

The Board's head of the interim arrangement, Jagmohan Dalimya, was forced to call the meeting after the Delhi Police claimed that Kundra, a minority (11.7 per cent) shareholder in Rajasthan Royals, had confessed to betting during the IPL matches.

If the charges are proved, Rajasthan Royals face the prospect of being terminated from the IPL and to avoid this fate, the franchise has already distanced itself from Kundra.

The working committee decided to forward the report to the Board's disciplinary committee.

"The sealed report of Sawani was not opened at the meeting as the committee found it prudent to hand it over to the disciplinary committee," the official said.

"As is the process of natural justice, the players, once they are out of judicial custody, will be summoned for presenting their side of the story before the final verdict is pronounced," he added.

Among other decisions, the working committee ratified the name of Sanjay Patel as the Secretary and also elected Mumbai Cricket Association President Ravi Sawant as the Treasurer, a post left vacant by Ajay Shirke in the wake of the spot-fixing scandal.

Today's meeting saw some heated exchange between some Board members and former BCCI and current Punjab Cricket Association President I S Bindra, who questioned the authority of Dalmiya.

Bindra asked in what capacity was Dalmiya pronouncing Kundra's suspension and appointing Patel and Sawant as executive functionaries of the Board since he is not the interim President.

To this, Sawant, who was representing the MCA, protested and showed Bindra a clause in the BCCI Constitution that allows someone to convene and conduct a meeting if five members of the current working committee propose his name.

After this, Bindra's protest didn't find any takers.

Asked whether there was any discussion regarding Chennai Super Kings during the meeting, the official answered in the negative.