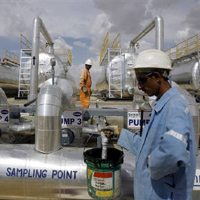 08 November, 2014
Print this article Font size -16+
In a bid to review Rajasthan's share of equity with the HPCL in the Rs 37,230-crore oil refinery, the ruling BJP government on Tuesday (29 July) told the house that a "consultancy firm" has been hired to review the financial aspects of the oil refinery and petrochemical plant.

The plant's foundation stone was laid by the former UPA chairperson Sonia Gandhi at Pachpadra in Barmer district in September last year.

Replying on the demands of grants on mining and industry after five hours of debate, minister-incharge R S Rathore said after giving free land, interest less loan of Rs 56,000 crore for fifteen years to HPCL to build the oil refinery-cum-petrochemical project of Rs 37,230 crore, it would give just 26 per cent of equity to the state.

Thus, the state government hired the consultancy firm to review and propose new financial aspect of the oil refinery, Rathore, who is also Parliamentary Minister, said.

Interrupting him, an Independent MLA M C Surana informed the house that there were reports that HPCL was ready to pay 50 per cent share in the business, on which Rathore said, "Wait, more will come out".

Quoting recent figures of Cairn oil exploring targets, Rathore claimed that Rajasthan had got plenty of not only crude oil reserves but also gas reserves as Barmer-Jaisalmer basin would touch the production of 7.0 billion barrels from 4.6 billion barrels.

The minister said the state government would strengthen the "single window" with simplified rules and regulations to attract investment in the state.

The state government would introduce Diploma in Mining at a college in Chittorgarh, and various other courses related to mining excavations, machines and tools in ITIs, he said.

He also announced many concessions in mining lease and to create job employments in unorganised sector besides opening an attendance register for labourers working in the private mines.

As proposed in the state budget 2014-15, the minister also underlined the concession and facilities to small, medium and big industries in textile, fibre and its raw material, garment export, food processing, and on the coming up Delhi-Mumbai Industrial Corridor (DMIC).

Earlier in the day during call attention motion of BJP MLA G S Tiwari, Rural Development and Panchayati Raj Minister G C Kataria told the House that land allotted to people in Prathivi Raj Nagar in Jaipur would be regularised on priority without any further delay.