Raising The Bar For India 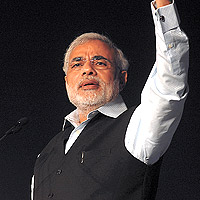 
It is an effort that is applauded by the industry. "With the right kind of environment, business needs hype," says Bhagyesh Soneji, chairperson of Assocham in Gujarat. She says that the state has always been considered as one of the best places to invest due to mindset and inherent enterprising nature of the people here. The companies based in Gujarat, Soneji adds, have over the years successfully built the capability to produce quality products for global markets, which has combined well with government-sponsored hype.

Gujarat has not just been able to get investment intent but claims to convert this intent into reality. "In 2009, the state signed over 1,800 MoUs with small and medium enterprises. Of this about 78 per cent are either under implementation or have reached completion stage. We expect to achieve a success ratio of about 85 per cent by next year. This is a big achievement compared to national average of just 20 per cent conversion," state industry secretary Maheshwar Sahu told Businessworld.

As for large industry, Gujarat government has signed 1,400 MoUs. These big industries have an implementation time period of about 5-7 years and the state government claims that till date almost 47 per cent of them have either been commissioned or are under implementation. "We are hopeful that by 2014, we would be able to convert almost 65 per cent of total MoUs on the ground," Sahu adds.

The industries secretary attributes the success of Gujarat to not just sustained marketing but vision and direction by way of right policies provided by the state government to create right business environment that has helped state achieve top slot.

"At the end of the day what do businessmen need? They need profits. They should be able to put up their project at a fast pace and begin work as soon as possible. They need better interaction with the state and other stakeholders and definitely good infrastructure. We have been trying to provide all these consistently over the years and that has surely helped," he says.

He also attributes the success partly to a wide base of small and medium enterprises in the state. Gujarat has over 3.4 lakh SMEs. "The SMEs cannot survive without anchor large industries. The government of India had carried out a survey in 2007 and Gujarat had seen 11 per cent of the SMEs shut shop, compared to national average of 17-18 per cent. We carried out a similar survey in 2010 just before Vibrant Gujarat 2011. We found that this figure had come down to just 5 per cent. This also indicates that bigger industrial units are healthy in the state," he adds.

A mineral-rich state both in terms of capacity reserves and production, Gujarat has a total mineral reserve of more than 19,000 million tonnes, including one of the highest reserves of bauxite, limestone and clay deposits in India.

Gujarat also has more than 30,000 engineering and 45,000 diploma engineering seats available at various engineering institutes. There are more than 900 higher education and vocational training institutes in the state that help generate skilled manpower for various industrial needs.

Gujarat has one of the lowest levels of minimum wage, which is around $120 per month, making the state extremely competitive. Despite this, it has minuscule number of man days lost due to any industrial unrest in the state. Of late, though, it has been witnessing some amount of unrest by way of strike by a large workforce at global auto giant General Motors' unit at Halol, where over 500 employees of 1,600 staff have been striking work for the past two months demanding better pay structure.

break-page-break
On the policy front, Gujarat has been a pioneer with 13 special investment regions of more than 100 sq. km each being planned, one mega petrochemical and petroleum investment region at Dahej, 60 special economic zones and existing 200 industrial areas, creating and providing opportunities across sectors. It is not just the existing industrial hubs that have provided the right platform for business to flourish; almost 38 per cent of the proposed and much-hyped Delhi Mumbai Industrial Corridor would find home in Gujarat. DMIC, being developed as a 'global manufacturing & trading hub' with the help of the Japanese, is expected to go a long way in helping India emerge as a major player in the field, taking its traditional economic rival China head on.

This initiative is currently being supported by various industrial areas for agro parks, tourism and recreation, and information technology parks.

Though many are yet to see the light of the day, it is such initiatives, Sahu says, that have helped attract businessmen to Gujarat. "For current government, development is not just about setting up of industrial parks with requisite infrastructure. We focus on overall development of the entire region -- basic infrastructure such as power, roads, and water, and even skill development and lifestyle upgradation of the people in the region. That is how the concept of special investment regions has come about and would remain at the focal point of Gujarat's growth," says Sahu.

Gujarat also has the advantage of having the longest coastline in the country. This has made it possible to house over 40 small and intermediate ports, apart from a major port at Kandla. It has seen setting up of world's first private port at Pipavav, followed by similar ports at Mundra, Dahej and Hazira.

The state is also power surplus and provides quality power at most places. In 2010-11, Gujarat added power generation capacity to the tune of 1,570 MW, nearly 10 per cent of the total capacity added in the country during the year. Gujarat's power plants produced 62 billion units last fiscal and the per capita power usage was at 1,424 units, double the national average. The total peak power demand in the state is likely to be 12,705 MW by 2012, while it would generate 18,764 MW by then.

The road and rail infrastructure is almost on a par with many developed nations and so is the communications network in form of telecom and IT networks. Gujarat has been rated as the state with the biggest optical fibre network in the country.

The interlinking of rivers in the state, with Sardar Sarovar project at perennially flowing Narmada river in South Gujarat, has satiated not just the thirst of its people but helped provide requisite water for industry, including in the arid region of Kutch, which witnessed a slew of industrial units cropping up after the 2001 earthquake. Today, the industrial development in this once arid region has reached such levels that the cost of land in the desert region ranges for Rs 7,00,000 per bigha to over Rs 2 crore per bigha at many places.

The biggest positive of the state, however, both Lahiri and Sahu agree, are its enterprising people. "In Gujarat, businessmen can grab the opportunity just like that. You don't need to tell anything to businessmen in Gujarat. They just understand what needs to be done. It is inherent," says Sahu.

It is this sharp business acumen that has seen a large number of service providers emerge over the past few years. To detractors, these are but in-between agents or facilitators that provide their services for a fee. But at the end of the day, it is such service providers that help businessmen by facilitating speedy clearances at various layers of government bureaucracy and also identifying business opportunities for investors. "Today, it is not just the number of management graduates and chartered accountants providing financial and accounting support to business that is high but even 'experts' in real estate business, providing legal and other services that have witnessed a boom across the state," Sahu adds.

Apart from skill, the big difference between employees in Gujarat and other states is that every employee in Gujarat thinks like an entrepreneur, Soneji says. "Every employee has a business sense and this sees them contribute much more towards growing of any company," says Soneji. She, however, rues the fact that not much of the business is based on innovation and also that Gujarat has a long way to go in providing right education to maintain scorching growth over the long term.

Not everything is however hunky-dory about the state's development. Lahiri sees high real estate prices that have been on fire due to NRI investment as a major stumbling block for small and medium enterprises seeking to start their ventures in the state.

"Land administration is definitely not up-to-date in the state and unless the state government comes to rescue of investors, like in the case of Tata Nano by providing land and financial help quickly, the implementation ratio could take a hit in the future," says Lahiri.

Though Lahiri also highlights the issue of pollution across most of the chemical estates across the industrial golden corridor running from Vapi in South Gujarat to Mehsana in North Gujarat as another major cause of concern, he is confident that nothing, other than a major catastrophe, such as the killer earthquake of 2001 or series of cyclones, floods and famines Gujarat witnessed in the decade of 1990-2000, or man-made calamity like ethnic strife of 2002, can stop the state's juggernaut of progress.

Soneji agrees. She says that there is an urgent need to focus on improving basic infrastructure for education and healthcare. "We have enough of investment. What we need urgently is to maintain balance between investment and financial development with socio-economic development if we want to grow as a society. We also need to be very sensitive to our environment, be it protecting and growing forest cover or coming down hard on industries that turn a blind eye towards environment protection," she adds.

Industry secretary Sahu wants the state's bureaucrats to be more proactive and help the state achieve global benchmarks. He says there is predominant and substantial action required on the bureaucratic front. "It cannot come from political leadership. It has to be from within," he adds.

Whether Gujarat does witness a change in bureaucratic attitude or not only future would be the best judge. For now, there is nothing stopping Gujarat and its growth juggernaut.