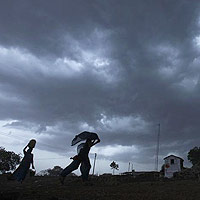 Monsoon rains were still one per cent below average in the week to August 8, the weather office said on Thursday, as drought continues to hit the west of the major producer and consumer of grains, rice and sugar this season.

But higher rainfall over most parts of rice-growing areas of the eastern region and soybean belt of the central region helped narrow the previous week's four per cent below average downpours.

In July, the rains were about 13 per cent below average.

India is facing its second drought in just four years. Rains below 90 per cent of long-term averages in the entire season are considered "deficient," or a drought in layman's terms.

The country has taken steps to cut irrigation costs and increase fodder supplies for livestock farmers. But it held off from imposing any curb on exports of agricultural products or a ban of futures trading in them.