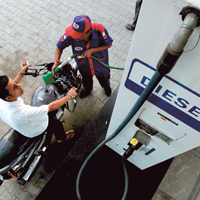 08 November, 2014
Print this article Font size -16+
Railways hiked freight rates for moving diesel and cooking fuels by almost 8 per cent on 26 February' 2013, a move that may result in marginal hike in retail fuel prices.
Freight on diesel was increased by 5.79 per cent to Rs 1,041.80 per tonne from Rs 984.80 a tonne currently. The same on kerosene went up by 5.79 per cent from Rs 886.30 per tonne to Rs 937.60 a tonne and that on liquified petroleum gas (LPG) by 5.79 per cent to Rs 937.60 a tonne.
The rates exclude development charge and busy season charges which essentially means that actual hike for oil companies would be higher, according to the Railway Budget for 2013-14 presented in Parliament by Railway Minister P K Bansal.
Oil companies transport over about 32-33 per cent of diesel, LPG and kerosene through railways and the hike in freight will either have to be passed on to consumers or have to be accounted as under-recoveries which the government would compensate from the General Budget.
Sources said it was unlikely that the government, which is hard pressed for finances, would agree to taking on additional burden and the freight increase is likely to be passed on to consumers.
The increase in retail rates of diesel, LPG and kerosene that is needed because of the freight increase is yet to be calculated.
Bansal said the increase in diesel prices last month had added Rs 3,330 crore to Railway's fuel bill. Also, adding to its burden, is electricity tariffs that are revised periodically.
"The increase in fuel bill during 2013-14 on account of these revisions would be more than Rs 5,100 crore," he said while proposing an across-the-board increase in freight charges of over 5 per cent.