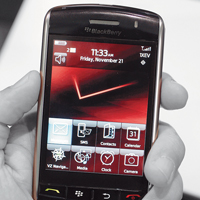 Research in Motion refuted on Wednesday a new round of Indian media reports, which claim that the BlackBerry maker has granted the government the encryption keys to its secure corporate email and messaging services.

India is one of the Canadian smartphone maker's few growing markets, where it is expanding aggressively. The company is facing falling sales elsewhere as customers abandon the BlackBerry in favour of Apple's iPhone and a slew of devices using Google Inc's Android software, leading to RIM's shares falling by more than 50 per cent over the past one year.

RIM, which has been grappling with the government for years, reiterated that it cannot provide access to its enterprise email and messaging services as the company itself does not possess the encryption keys for the same and these remain in the control of its corporate clients.

The Economic Times, in a report on its website that cited a telecom department official and certain documents reviewed, said that RIM had provided the government a solution that gave it access to corporate emails.

RIM categorically denied this claim in a statement. It has more than once refuted similar claims in India over the last two years.

"RIM is providing an appropriate lawful access solution that enables India's telecom operators to be legally compliant with respect to their BlackBerry consumer traffic, to the same degree as other smartphone providers in India, but this does not extend to secure BlackBerry enterprise communications," said Waterloo, Ontario-based RIM in a statement.

RIM gave India access to its consumer services, including its Messenger services, in January last year after authorities raised security concerns, but said it could not allow monitoring of its enterprise email.

The Indian government is fearful that encrypted BlackBerry services could be used to foster unrest or allow militants to organize or carry out attacks.

'Secure And Encrypted'
David Paterson, RIM's head of government relations, said he is positive that the Indian government recognizes encryption is fundamental to attracting and maintaining international business in the country and that it would not make any demands that could jeopardize foreign investment in India.

"The fact is that BlackBerry enterprise communications in India remain secure and encrypted. No change has been made or ever can be made in India or anywhere," he said in an interview.

Enterprise clients - corporations and government agencies signed up to the BlackBerry Enterprise Server - are assigned encryption keys stored only on individual user accounts. For such users, any data sent from a BlackBerry is scrambled at the source and reconstituted on arrival at the receiving device.

RIM has long maintained that only the sponsoring business or organization has the technical capability to grant access to encrypted enterprise email.