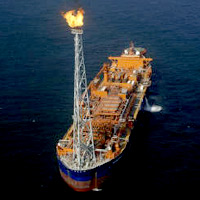 08 November, 2014
Print this article Font size -16+
Reliance Industries has said it will give up about 56% of "low prospectivity area" in its eastern offshore KG-D6 block to retain only the portion where oil and gas discoveries have been made.

In an investor presentation after announcing the January- March quarter financial results, RIL said a "proposal for relinquishment of low prospectivity area (has been) submitted" to the government.

The area RIL intends to retain contains 18 gas and one oil discoveries including the currently producing Dhirubhai-1 and 3 (D1&D3) gas and MA oil and gas fields.

RIL said it has submitted to authorities revised field development plans for D1&D3 as well as D26 or MA fields that includes work-overs and facility upgrade to improve gas production.

"Next wave of projects to exploit the undeveloped discovered resources (will be) targeted over the next 3 -5 years," it said.

Of the remaining finds, the government had last year approved field development plan for four smaller discoveries and the company has submitted investment plans for another cluster known as R-Series.

Investment plans for other satellite (D29, D30 and D31) will be submitted once upstream regulator DGH approves their commerciality.

RIL made the area relinquishment offer last month just as the oil ministry was readying an order asking the firm to vacate some 5,970 sq km of area of KG-D6 block.

Contractually, companies are required to relinquish 25% of the area in an oil and gas block at the end of first phase of exploration that spans some three years.

At the end of second phase, 50% of the area is to be given up and by the third phase only such area is allowed to be retained where the company has made a discovery and is required for development and production of the same. The second and third phases are of two years duration each.

Sources said Directorate General of Hydrocarbons (DGH) in 2006 agreed to RIL proposal of declaring the entire 7,645 sq km as discovery area, thereby allowing the company to retain the full area.

The decision was ratified by a committee headed by Additional Secretary in the Ministry and by the Oil Minister thereafter.

But the decision was questioned by government auditor CAG as at the end of the third phase, only 79% of the block area was covered by 3D seismic survey and yet the entire area was declared a discovery area.

CAG in its performance audit in 2011 had asked the Ministry to review determination of entire contract area of KG-DWN-98/3 (KG-D6) as 'discovery area'.

In the aftermath of CAG's observation, the DGH recommended to the oil ministry that RIL should be informed that an area of 5,970 sq km is treated as having been relinquished in the first instance.

Sources said the ministry had not yet served the relinquishment order on RIL.

RIL-Niko have made 18 gas and 1 oil discovery in KG-D6 block. Of these, the largest gas finds, Dhirubhai-1 & 3, were brought into production in April 2009 and the oil discovery, MA began pumping in September 2008.

KG-D6 output has dipped from 69.43 million standard cubic meters per day achieved in March 2010 to under 17 mmscmd this month.