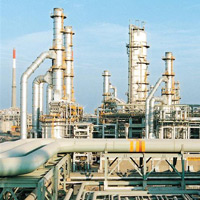 But the fields have seen the output drop to 27.65 mmscmd before the end of August itself, sources privy to the development said.

The production has fallen by about one mmscmd since July and at this rate the output may be less than the projected output by the end of current fiscal.

Sources said the day can be saved if the government allows the company to do well interventions to revive sick wells.

Dhirubhai-1 and 3 (D1&D3) gas fields in KG-D6 block and MA oilfield in the same area produced about 30 mmscmd on debut in April 2009 and reached 61.5 mmscmd in March 2010 before water and sand ingress gradually brought down the output.

In the week ending August 26, D1&D3 produced 22.11 mmscmd and MA another 5.54 mmscmd, according to a status report filed by the company with the Oil Ministry and DGH.

Sources said RIL had in its projections stated that output from D1&D3 in 2012-13 would be 20.20 mmscmd and another 7.40 mmcmd would come from MA oilfield. In the subsequent year, production from D1&D3 would further drop to 14 mmscmd while MA oilfield is expected to produce 8.60 mmcmd.

The output from KG-D6 is short of the 86.73 mmscmd (about 80 mmscmd from D1&D3 and the rest from MA field) level envisaged by now as per the field development plan approved in 2006.

This output was envisaged from a total of 31 wells.

But so far, RIL has drilled only 22 wells on D1&D3 and only 18 of them have been put on production.

Of the 18 wells, six have ceased production due to high water/sand ingress.

MA oilfield in the same block had seen two out of the six stopping production due to the same reasons.

RIL is the operator of the 7,645-sq-km D6 block with 60% stake while London-based BP plc has 30% interest. The remaining is with Niko Resources of Canada.

The firm had made a total of 18 gas and one oil finds in the block. Of these, two gas finds - D1&D3, and one oil - MA, have so far been put on production.