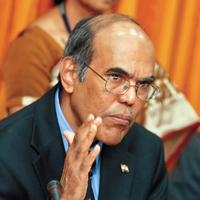 08 November, 2014
Print this article Font size -16+
The Reserve Bank of India (RBI) chief warned of upside risks to inflation and expressed worry over the country's high current account deficit on Thursday, 30 May '2013 denting hopes for rate cuts and sending bond yields to a two-week high and the rupee to a 10-month low.

The rupee ended up losing 21 paise to end at new 10-month low of 56.38 on fag-end spurt in dollar demand after RBI Governor D Subbarao painted a dim macro economic picture fuelling fears of local currency plunging to record low levels in the short-term. Ahead of expectations of steady US GDP and jobs data that may force Federal Reserve to consider early withdrawal of stimulus, the US dollar strengthened against major rivals.

The rupee, which fell for the third straight day, ignored the $140 million capital inflows in equities. Forex dealers said there was no sign of RBI intervention in forex market.

India's economic growth likely remained stuck around a near four-year low in the March quarter, compounding the government's woes as it heads into a busy election period weighed down by graft scandals and a record of poor economic management.

A Reuters poll of 37 economists showed gross domestic product (GDP) expanded 4.8 per cent year-on-year, only slightly better than the 4.5 per cent growth in the previous three months, which was the lowest in fifteen quarters.

If the forecast materialises, it means India's full-year economic growth for 2012-13 (April/March) was about 5 per cent, its worst in a decade, and a far cry from the 9 per cent annual expansion recorded until two years back.

RBI Governor Duvvuri Subbarao said the current account deficit, which hit a record high 6.7 per cent of GDP in the December quarter on heavy oil and gold imports, would be a key factor in monetary policy decisions.

The RBI has cut policy interest rates by 25 basis points at each of its three reviews in 2013. Investors and analysts had generally expected another cut at its next review, on June 17.

"Growth is significantly moderated, inflation is somewhat off its peak but there are several upside risk factors, the balance of payments is under stress and investments have to pick up," Subbarao said during a speech in the western city of Ahmedabad.

Annual consumer price inflation slowed to 9.39 percent in April, but was still significantly higher than the wholesale price index inflation at 4.89 percent.

On Friday, India is expected to report that its economy grew at 4.8 per cent in the quarter that ended in March, bringing full fiscal year growth to about 5 percent, the worst in a decade.

"The bond market gave up gains as now it feels that the pace of rate cuts will not be as much as it had anticipated earlier," said N.S. Venkatesh, treasurer at IDBI Bank in Mumbai.

Weakening commodity prices had bolstered hopes of easing pressure both on the current account deficit and inflation, although Subbarao warned against complacency.