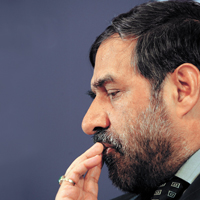 08 November, 2014
Print this article Font size -16+
Trade Minister Anand Sharma said on Thursday, 29 August, the Reserve Bank of India should look into suggestions that it monetise its gold reserves to reduce imports and dollar outflows that have hammered the rupee, but emphasised it was for the bank to decide.

India has 557.7 tonnes of gold in its reserves, making it the eleventh biggest holder, according to the World Gold Council. India consumer's appetite for gold has been a drag on the rupee, the worst performing major currency since May.

"I have not said their should be any mortgaging of the gold, or auction of the gold, that is incorrect. I have just said the RBI should look into...how they can benefit the people, particularly with regard to the bonds or the monetisation," Anand Sharma told parliament.

"This is a suggestion which has been made by many economists," he said, adding that it a was up to the Reserve Bank of India to decide whether such a measure would bring down gold imports.