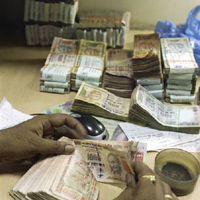 08 November, 2014
Print this article Font size -16+
The RBI intervened in the foreign exchange market on Thursday, 1 August, to stop the rupee's slide toward a record low as its defence of the currency, built around draining cash from money markets, came under rising pressure.

With the Reserve Bank of India struggling to hold the line, investors are sceptical whether the government will take swift, credible action to reduce a gaping current account deficit despite Finance Minister P. Chidambaram's assurances.

"The market wants real action," said Param Sarma, chief executive at NSP Forex, a consultancy firm in Mumbai. "The government and RBI want to keep rupee under control to check inflation and to ultimately reverse tightening measures so they can support growth."

Sarma, along with many others, believes the government could opt to issue a bond aimed at drawing inflows from expatriate Indians, as the central bank has voiced its opposition to a sovereign bond issue.

The need to shore up the economy with economic reforms is becoming more urgent given the prospect the Federal Reserve will at some point start removing its US monetary stimulus, making the global investment environment even more difficult for India.

Goldman Sachs downgraded Indian equities to "underweight" from "market-weight" late on Wednesday, noting the RBI's liquidity tightening measures are adding to the woes of an economy that grew at a decade low of 5 percent in the last fiscal year and is showing "no signs" of a pickup in investment demand.

A survey of the manufacturing sector released by HSBC on Thursday showed the slowdown in Indian factory activity deepened in July as order books shrank by the most in over four years.

Investors worry Prime Minister Manmohan Singh's weak, minority coalition will be prevented from taking bold action as it faces political gridlock ahead of general elections due by next year.

"Although the government has taken many policy initiatives on the infrastructure front and pushed through various reforms so far this year, markets may get worried about the potential policy paralysis ahead of the general elections," said Goldman Sachs in its downgrade note.

"The various government policy reforms are the key to kick-start the investment cycle and unclog the structural bottlenecks at the expected pace, especially on the infrastructure front."

Echoes Of '91
Both Citigroup and Deutsche Bank have this month downgraded India's economic growth forecasts, citing in part the prospect that the RBI's measures will dampen investment.

Chidambaram said on Wednesday the government was looking into various options to attract inflows, including relaxing overseas borrowing rules and curbing some imports.

The economy is stuck in a quagmire of low growth, persistent inflation, a wide current account deficit and a rapidly weakening currency, but policy measures to tackle any one of these will likely worsen the others.

By virtue of being a net importing country, a weakening currency quickly inflates India's import bill leading to higher inflation and a wider current account deficit, which in turn pressures growth and the country's foreign exchange reserves.

While holding policy rates steady on Tuesday, the RBI said it would roll back its tight liquidity strategy once the currency market stabilises, but the high short term interest rates have already forced some banks to put up lending rates, hurting prospects for investment and economic growth.

The liquidity squeeze has caused bond yields to surge. Benchmark 10-year yields are up around a half percentage point since the RBI's measures, raising the risks that borrowing costs will rise across the board.

Foreign investors have been heavy sellers of India debt, having sold almost $9 billion in bonds since late May, and a little under $2 billion in stocks since then.

The central bank has been spotted intervening since May, and as of July 19 its foreign exchange reserves stood at $279.20 billion, roughly enough to cover 7 months of import cover. Reserves have fallen from a 2013 peak of $296.37 billion, but not all of the decline is due to currency intervention.

Analysts say that ultimately reforms need to be deepened, perhaps on the scale of 1991, when a balance of payment crisis forced India to liberalise its economy.

"The real solution lies in improving the investment climate by giving a strong push to structural reforms the way it was given in 1991-92 and stimulating key exporting industries," said Rupa Rege Nitsure, chief economist of Bank of Baroda in Mumbai.